My An Arkie's Faith column from the December 9, 2020, issue of The Polk County Pulse. 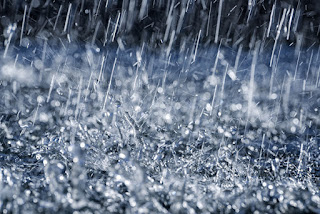 The rain beating down on my shop’s metal roof was so loud that conversation wasn’t possible. The downpour was so heavy that I could not see the highway in front of my shop. A flash river was running down my driveway. In the shop bay where I was trying to work, water streamed from the ceiling in several places. “I hope this downpour will be over soon,” I thought. But it wasn’t over soon. The deluge continued. After hours of hard rain, there was an inch of water on my shop floor.

By the time the rain ended, nine inches of rain had fallen. Rainwater flooded the floor throughout the shop. I knew that my old shop building had several leaks, but it had never flooded before. I realized that I was going to have to get my roof repaired. Earlier in the year, I had the leaks worked on a couple of times, but now they seemed worse than before. What was I going to do about my roof?

A couple of weeks later, our area had another day of torrential rains. Once again, rain flooded my entire shop. The water flowed through the building and ran out into the driveway. I knew that I was going to have to do something about the leaky roof. But for a couple of months, we did not have another heavy rainfall, and I put it out of my mind. When it would rain, I would have a few small leaks, but I had been dealing with small leaks for several years. It seemed that there were always more pressing things. 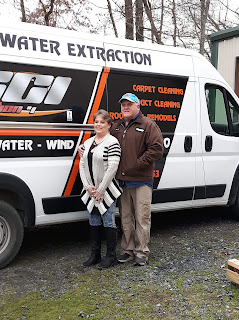 A few weeks ago, I decided that I would have to get something done about the leaky roof. But I had no idea who to call. Two different guys had worked on patching the leaks, but they only seemed to get worse. I called a neighboring restoration services business to see if they had any recommendations. They gave me the phone numbers of a couple of roofers who had worked for them. I made the calls, and when the first roofer came to provide me with a bid, I realized that we had met before. He inspected my roof, and we talked about the possibilities. The old, rusty, corrugated metal roof was in bad shape. He gave me a bid for replacing a few pieces of metal and coating the entire roof with a premium roof coating system.

The next day I talked to the roofer again and got a separate bid to remove the old corrugated metal from the roof and replace it with new 26 gauge metal panels. I decided that replacement would be better in the long run, so I signed a contract to have to work done. On Tuesday of last week, it was a beautiful sunny day; the crew started working on the project and finished the main section of my building the next morning. There was a light rain falling as they fastened the last few sheets of metal. Later in the day, the rain intensified, but my shop was dry. It was delightfully satisfying to hear the rain on my new roof and not have any leaks in my shop. 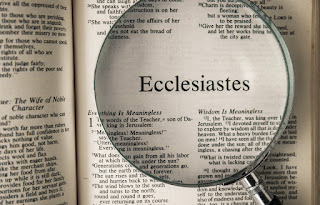 While I was reading the book of Ecclesiastes, I found this little gem; “When you are too lazy to repair your roof, it will leak, and the house will fall in.” Ecclesiastes 10:18 (GNT) “That is a little bit too close to home,” I thought. Earlier this summer, I had a new roof put on the four-bay carport in front of my business. The job was much more expensive because I had let much of the roof rot away and fall in. I had to remove all of the old decking before I could install the new roof. My procrastination had made the job much more expensive. 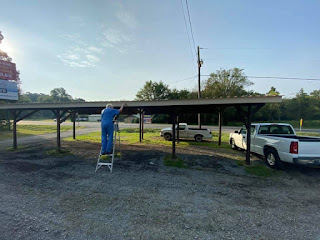 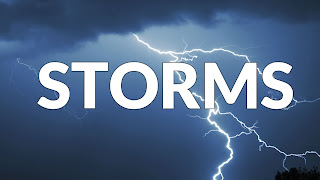 Are you experiencing storms in your life right now? It’s been a year of unexpected rain and storms. 2020 has been a year like no other. Sometimes it is has been just a drizzle, but other times it seems like the storms of life have rattled windows with wave after wave of thunder and bursts of lightning. During these storms, you need to make sure that you have shelter. You need a good roof to protect you from the elements. Isaiah 15:4 (CEV) tells us, “You have been a place of safety for the poor and needy in times of trouble. Brutal enemies pounded us like a heavy rain or the heat of the sun at noon, but you were our shelter.”

Gentle Reader, is there stormy weather in your life right now? Where are you finding shelter from the storms? “If you make the Lord your refuge, if you make the Most High your shelter, no evil will conquer you; no plague will come near your home.” Psalms 91: 9,10 (NLT) When the rains come, make sure that your find shelter under a roof that doesn’t leak. Pray the prayer that David prayed, “I come to you for shelter. Protect me, keep me safe, and don’t disappoint me.” Psalms 25:20 (CEV)