My An Arkie's Faith column from the November 24, 2021, issue of The Polk County Pulse. 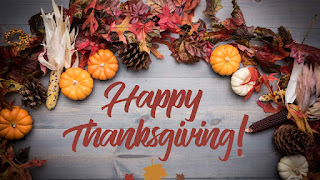 Golden threads of morning light announce a new day. It is our first Thanksgiving Day in Arkansas. The weather is unusually warm for November, and I am thankful for it. My wife and I are hosting Thanksgiving this year, and there will be more than twenty people here. There isn’t room for that many in our small house, so we have cleaned the garage and mopped the floor several times. We have set up borrowed tables and folding chairs in the garage. Cooking is already underway in the kitchen. I’m thankful for the warm weather because our garage isn’t heated.

There is a bustle of activity as everyone arrives. I’m thankful to be surrounded by family and friends. My parents and both sets of grandparents are here. After a bountiful meal, my Grandpa Lawry asks if he can sing a song. He loves to sing, and even though he doesn’t have a good singing voice, some of my favorite memories are of him singing. Grandpa chooses the song, The Love of God. His voice wavers and his words slur a bit as he sings acapella, “The love of God is greater far than tongue or pen can ever tell. It goes beyond the highest star and reaches to the lowest hell.”

His voice is filled with emotion, and I do not doubt that he believes every word with his whole heart. He continues singing, “Could we with ink the ocean fill and were the skies of parchment made. Were every stalk on earth a quill and every man a scribe by trade. To write the love of God above would drain the ocean dry. Nor could the scroll contain the whole though stretched from sky to sky.” As the last words of the song rolled off his lips, I felt warm and cozy, surrounded by the love of God and family. 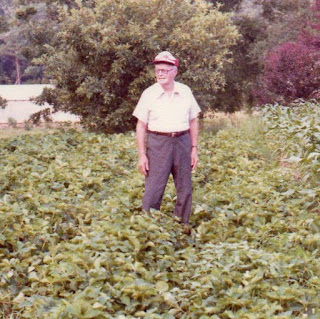 At the time, I didn’t realize how special that Thanksgiving would become in my memory. But in just a couple of weeks, my Grandpa passed away suddenly. I’m thankful for that first Thanksgiving in Arkansas and the memory of Grandpa singing. Even though it was forty years ago, my memories are vivid, and I can still hear him sing.

I remember learning in school that the Pilgrims held the first Thanksgiving in 1621. But since my boyhood school days, I have discovered that there were Thanksgiving celebrations held in America before the 1620s. The people of El Paso, Texas, claim that the first Thanksgiving was held in Texas in 1598. Spanish conquistador Don Juan de Oñate led an expedition north of the Rio Grande into an area now known as Texas, where he and his colonists joined Native Americans in a feast on April 30, 1598.

The King of Spain sent Oñate to colonize the area north of the Rio Grande. His journey started from Santa Barbara, Chihuahua. The 50-day trip across the Chihuahua Desert, was unforgiving to the expedition. There were 400 men, 83 wagons, and thousands of horses, sheep, and goats. Their provisions ran out quickly, and the desert provided no running water or rainfall. After days without water, the party finally spotted the banks of the Rio Grande. Capt. Villagrá, who provided a written record of the expedition, wrote, “Our men threw themselves into the water and drank as though the entire river did not carry enough to quench their terrible thirst. Then satisfied, they threw themselves upon the cool sands, deformed and swollen and more like toads than men.” They rested under the cottonwood trees on the banks of the Rio Grande for ten days, spending their time swimming, fishing, and hunting. 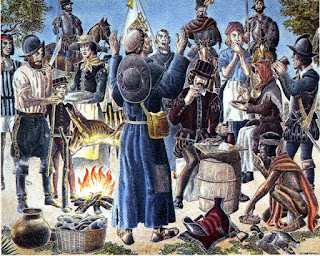 On April 30, 1598, Oñate requested that the friars traveling with them say a Mass of Thanksgiving to celebrate their deliverance from death in the desert. “We built a great bonfire and roasted the meat and fish, and then all sat down to a repast the like of which we had never enjoyed before,” Villagrá wrote. “We were happy that our trials were over, as happy as were the passengers in the Ark when they saw the dove returning with the olive branch in his beak, bringing tidings that the deluge had subsided.”

Although the people of El Paso have an excellent historical claim to the first Thanksgiving in America, the people of St. Augustine, Florida, believe that they have a better one. On September 8, 1565, hundreds of Spanish settlers, under Pedro Menéndez de Avilés, landed at what is now St. Augustine, Florida. Blaring trumpets and thundering artillery accompanied Avilés as he waded ashore. The Spanish admiral kissed Father Francisco Lopez’s cross, then claimed Florida for God and Spain. As curious members of the indigenous Timucua tribe looked on, the newly arrived colonists gathered around a makeshift altar as Father Lopez performed a Catholic Mass of Thanksgiving for their safe arrival. At the invitation of the Spanish, the Timucuans then joined the newcomers in a communal meal. 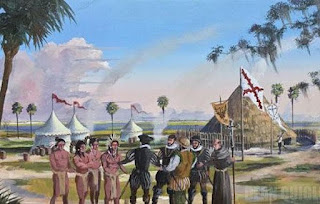 Florida historian Michael Gannon feels that this feast was America’s first Thanksgiving. In his book “The Cross in the Sand,” he wrote, “It was the first community act of religion and thanksgiving in the first permanent settlement in the land.” But Texas holds an even earlier claim to the first Thanksgiving. An official Texas Historical Commission marker near the Palo Duro Canyon acknowledges that Fray Juan De Padillo conducted thanksgiving services there on May 29, 1541, for the army accompanying Spanish conquistador Francisco Vasquez de Coronado.

Gentle Reader, the location of the first Thanksgiving in America is not what is essential. God wants us all to live as though each day was Thanksgiving. But too often, we forget to give thanks for what God is doing for us. We have a choice, every day, to give him thanks. And with a heart of thanksgiving, we realize that no matter what we face, God doesn’t just work to change our situations and help us through our problems. He does more. He changes our hearts. Paul wrote, “in every situation be thankful and continually give thanks to God; for this is the will of God for you in Christ Jesus.” 1 Thessalonians 5:18 (AMP) “Clothe yourself in love. Love is what holds you all together in perfect unity. Let the peace that Christ gives control your thinking, because you were all called together in one body to have peace. Always be thankful.” Colossians 3:14,15 (NCV) Look for things to thank God for every day. Happy Thanksgiving!