The Threat of Rain

My An Arkie's Faith column from the December 8, 2021, issue of The Polk County Pulse. 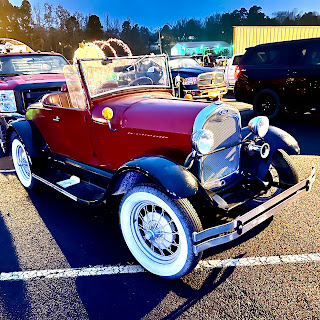 I kept an eye on the sky all day while I was working. It was covered in heavy clouds, colored a storm cloud grey. Occasionally the clouds would drip a bit as it almost began to rain. But most of the day, the skies are veiled in the lightest of mists. Tonight is the annual Christmas parade, and I wonder what the weather will do. I will be driving our Shay Model A roadster in the parade with the top down, and Ashley and Jodi of the Ouachita Chronicles will be riding in the open rumble seat. What will the weather bring?

As I drive the Model A home from work, there is a light mist. Just enough to spot the windshield and make the seat wet. As I leave to go to the parade staging area, I throw in a roll of paper towels to help dry off. Questions swirl in my mind. How wet would we get driving in the parade? How many people would show up in this damp, wet weather? Just before the parade started, I dried off the seats. Once the parade began, the clouds held their moisture, and we didn’t get wet. As I drove down the parade route, People lined the streets. It didn’t seem that the weather had kept anyone away.

As I drove in the parade, I looked for my family. My granddaughters from Louisiana were here, and family from the Pacific Northwest. I waved and then honked the ahooga horn on the Model A when I spotted them. They all had a great time at the parade, and the girls came home with lots of candy. 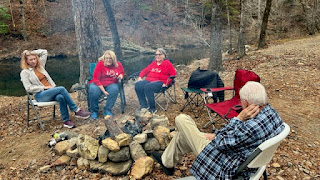 The following day, I was again keeping an eye on the skies. Everything was wet from the rain overnight. We were having a mini family reunion this weekend, and for several weeks, my wife had been planning a picnic for today. One of our favorite drives is along the Cossatot River near Shady. There is a large area to pull off the road with excellent access to the river. For some time, my wife has wanted to have a picnic there. With family visiting us, she thought this weekend would be perfect for a picnic.

As I loaded firewood, chairs, tables, and food into the SUV, the skies were spitting a few drops of rain on me. While we discussed the possibility of rain, my family from the Pacific Northwest told me that they would never get to do anything outdoors if they worried about a bit of rain. By the time we loaded up and headed for Shady, the skies had lightened, and there was no precipitation.

When we arrived at the banks of the Cossatot, we found a nice fire ring and got a fire started. We set up chairs around the campfire and listened to the river whispering sweet notes of cascading water. The sound of the water washes the stress of the week away. We enjoy visiting as the smoke from the campfire takes turns blowing in people’s faces. When the fire has burnt down enough to provide a bed of coals, we roast hot dogs and eat our picnic lunch. The area is so beautiful and peaceful that no one is in a hurry to leave. 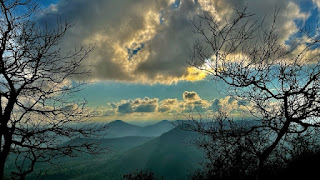 Dark, stormy clouds filled the sky a couple of times, but it never rained on our picnic. We had been concerned that the weather might spoil our fun, but it turned out to be perfect. After several hours, we put out the fire and loaded up the vehicles to return home. I decided to make a detour on the way home and drive to the top of Eagle Mountain. The road was difficult in my two-wheel-drive SUV. I kept losing traction on one steep portion of the road and had to back down the road and try three times before making it. But we were rewarded with stunning views from the summit. The sun was trying to break through the clouds, and the misty atmosphere gave the landscape an ethereal, otherworldly feel.

As we made our way down the mountain and back home, I was thankful that we had not allowed the threat of rain to keep us from our picnic. Instead of sitting at the house and wondering what the weather would do, we had gone ahead with our plans, and the day had turned out fantastic.

Do you like the rain? We tend not to like rain very much, especially if we have an outdoor activity or work planned. Unless we have crops that need water, we don’t like the rain. Few of us look out the window on a rainy day and say, “what a great day!” The rain gets in the way of our comfort. 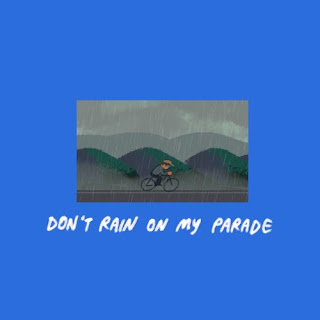 Too often, we let the possibility of something going wrong keep us from doing something we want to do. “But what if something goes wrong,” we say. “What if it rains on my parade.” We fail to reach our potential in life because we are too timid. But, “God has not given us a spirit of fear and timidity, but of power, love, and self-discipline.” 2 Timothy 1:7 (NLT)

In Matthew 25, Jesus told a story that illustrates this. He describes how a wealthy master entrusted three of His employees with his money. The Master gave a different amount to each one but the same task. To invest the money he gave them. One employee was very timid. He was afraid of failure. He said, “Master, I knew that you were a hard man. So I was afraid and went and hid your money in the ground.” Matthew 25:24,25 (NCV)

Gentle Reader, the employee in this story didn’t lose the Master’s money, but he wasted an opportunity. The threat of failure kept him from fulfilling his potential. God told Joshua, “Be strong and courageous! Do not be afraid or discouraged. For the Lord your God is with you wherever you go.” Joshua 1:9 (NLT) And he is telling you the same thing. Don’t let fear of failure keep you from doing great things in your life. Don’t let the threat of rain keep you from being all that God wants you to be.

Posted by Richard Lawry at 1:26 PM