My An Arkie's Faith column from the January 5, 2022, issue of The Polk County Pulse. 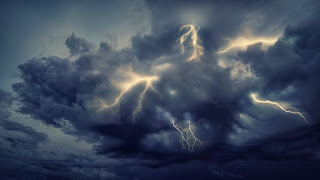 As the clock struck twelve and ushered in the new year, fireworks boomed outside. They were the natural kind of fireworks, with bright flashes of lightning and deep booming peals of thunder. 2022 came in with a bang. The pounding on the roof announced that heavy rain was pouring down. With temperatures in the upper 60s, accompanied by heavy rain, thunder, and lightning, it seemed much more like a spring storm than the first day of the new year.

After a toast to the new year, I was off to bed. Midnight is far later than my regular bedtime, but I stayed up to usher out 2021, hoping for something better in 2022. When I got up in the morning, the temperature was still unseasonably warm. Heavy rains had filled the creek behind my house during the night. The rushing water was pushing over the creek bank in several places.

We spent the morning preparing for a New Year’s feast. Along with a roast beef, there was fresh green beans with mushrooms, jalapeno cream corn, mashed potatoes and gravy, fresh baked rolls, with gingerbread and whipped cream for dessert. Circumstance made it so that our family could not be together on Christmas, but we would celebrate Christmas this afternoon. 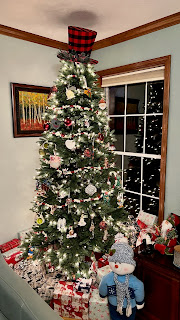 When everyone arrived, happy conversation filled the house. The Christmas dinner was marvelous, and after everyone was sufficiently stuffed, we moved to the living room to exchange presents. But with the warm temperatures outside and being a week late, it didn’t seem very Christmassy.

That evening we watched the movie Ron’s Gone Wrong with my granddaughters. They filled the room with laughter at the antics of Ron, the B-Bot that fell off the back of a truck, so it’s a bit defective. By the time we went to bed, the temperatures were dropping outside.

The following day, the temperature was a frigid 19 degrees. Light snow was falling, and by the time we sat down for breakfast, there was enough snow to cover the yard with a thin layer of white. We had a white Christmas; it just came in January. We had Grandma’s egg casserole for breakfast, a Christmas morning tradition at our house, along with what may become a new tradition, aebleskivers. 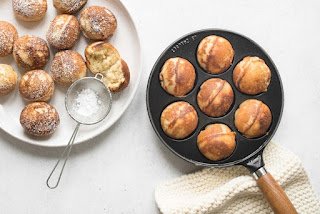 My daughter had given my wife an aebleskiver pan for Christmas. Aebleskiver is a Danish dessert, like large, filled doughnut holes. They have been popular for hundreds of years in Denmark and are often served during the Christmas holiday. The earliest known aebleskiver pans are more than 300 years old, made from hammered copper. But bare copper wasn’t ideal and was soon succeeded by cast iron, distributing heat more evenly. The aebleskivers were delicious, and the softly falling snow added to the cheerful holiday atmosphere.

After everyone left that afternoon, we decided to drive up the Talimena Drive to Queen Wilhelmina State Park. From Mena, we could see that the trees were frosted in white at higher elevations. We hadn’t driven very far out of town when the trees began to turn white. Bare and seemingly lifeless trees turned into marvelous works of art. The white-coated trees changed the landscape into a mystical, magical place. The ice, frost, and snow turned the mountain into a winter wonderland. 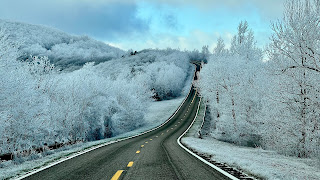 As we made our way up the mountain, the coating on the trees became thicker. They looked like they had been flocked, with each branch having almost an inch of snow clinging to it. There were heavy clouds, but occasionally the sun tried to pierce the clouds, and I could see the sun’s outline. When the sun was able to break through, the light on the trees made the white even whiter and brighter. The bitterly cold wind would go right through me when I would step out of the car for a minute or two to take photos. The temperature was 15 degrees, and it was windy. The bright white trees and the moody skies made stunning pictures. Occasionally the sun would shine through, putting a portion of the hillside in the spotlight. 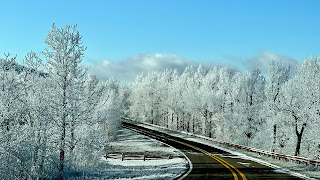 Snow can be beautiful, and it certainly transformed the scenery on Rich Mountain. Where there had been grey, leafless, and seemingly lifeless trees, now there was a bright white beauty that turned the landscape into a winter wonderland. I loved seeing how the ugly imperfections of the stunted, twisted trees become lovely when covered with a blanket of snow. 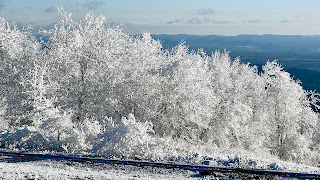 It made me think of the Bible verse, “wash me, and I will be whiter than snow.” Psalms 51:7 (NIV) It is lovely to visualize how God can take the imperfections of our hearts and turn them into something pure and clean and beautiful. God is pleased when we allow him to cover our sins. Because of His great love for us, God doesn’t abandon us in our sins. Instead, by His grace, He wants to change and transform us. “’Come now, let us think about this together,’ says the Lord. ‘Even though your sins are bright red, they will be as white as snow.’” Isaiah 1:18 (NLV)

When God takes our sins and makes them white as snow, it cuts down on the noise of the world around us. The world becomes just a bit quieter and more peaceful. We can more easily hear God as he communicates with us. He covers the ugly branches of our lives with beautiful pristine whiteness. 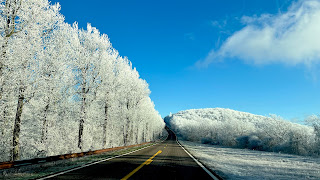 Gentle Reader, we all have sin in our life that makes us dirty and separates us from God. But God has provided a way for us to be clean again. Through Jesus, we can all be as white as snow. “If we confess our sins, He is faithful and just to forgive us our sins, and to cleanse us from all unrighteousness.” 1 John 1:9 (KJV) So next time a snowstorm heads your way, make sure and take time to enjoy the beauty of His glistening masterpiece. Stop for a few minutes to take in the winter wonderland and thank God for making your sins as white as snow.