My An Arkie's Faith column from the August 24, 2022, issue of The Polk County Pulse. 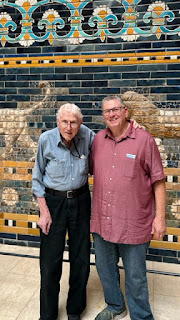 It was our first full day in Berlin and we were at the Pergamon Museum. We were experiencing one of the well-known features of the museum, the Ishtar Gate from Babylon. It reaches thirty-eight feet from the floor to the ceiling, covered in shimmering, brightly glazed cobalt blue bricks. The finely carved animal reliefs shine with vibrant aqua blues, greens, and yellows. Daddy and I gazed up at the images of dragons, lions, and young bulls.

Babylonian King Nebuchadnezzar II built the Ishtar Gate around 575 BCE. The gate was the main entrance into the city of Babylon and was part of Nebuchadnezzar's plan to beautify his empire's capital. He placed an inscription on the gate that read, "I placed wild bulls and ferocious dragons in the gateways and thus adorned them with luxurious splendor so that people might gaze on them in wonder." Thousands of years later, his words ring true as I gazed in wonder when I first encountered the ancient entryway. 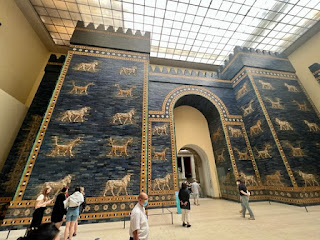 In a museum filled with ancient wonders, including the Market Gate of Miletus, a large marble monument built in Miletus, in modern-day Turkey, in the 2nd century AD., the Ishtar Gate stood out in its brilliant color and magnificent artistry. "What an amazing way to start our tour of Germany," I thought. After lunch in the museum café, where I enjoyed an excellent veggie burger and experienced rhubarb juice for the first time, Daddy and I headed back to our hotel.

As we walked across the Spree River bridge, we saw a fantastic view of the Berlin Cathedral with its striking, green-colored copper dome. The Cathedral's history goes back to the 15th century. In 1894, Emperor Wilhelm II decided to demolish the old Cathedral and build a new cathedral that he envisioned as the answer to St. Peter's Basilica in Rome. 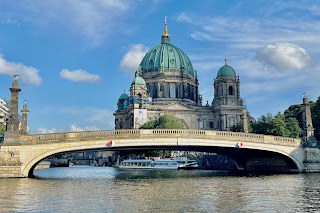 The Berlin Cathedral tour was an optional extra for anyone who wanted to go. We were to meet our tour guide at 4:30 in the hotel lobby and walk to the Cathedral for the 5:00 tour. By the time Daddy and I returned to the hotel, and he was settled in our room, the tour group had already left the hotel.

I started walking to the train station using the app on my phone. According to the app, I would be able to catch the train and make it to the Cathedral in time. There was just one problem. The app directed me to the train station and even gave me the train number, but I couldn't find the train. There were two levels to the station, but I couldn't find my train, U5, anywhere. I assumed the U meant upper, and I walked the length of the upper level but could not find it. I finally found a wide staircase going down from the main level and discovered that U meant underground. By the time I found my train and got off at the Museum Island stop, it was after 5:00. 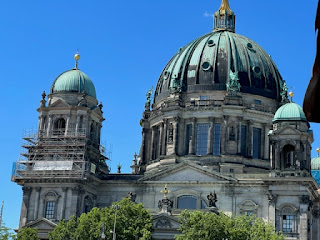 I hurried to the Berlin Cathedral, but there was no sign of my group. When I walked up to the entrance, there were signs saying the Cathedral was closed for the day. I tried the door, thinking my group might be inside or someone could direct me to them, but the door was locked. A wave of disappointment washed over me. I had missed the tour. I was upset with myself for not figuring out the train system in time. "Oh well," I thought, "there's nothing I can do about it now."

I had been so rushed trying to get to the Cathedral on time that I hadn't paid attention to what was happening around me. I stood there, taking in my surroundings. As I walked back onto the Spree River bridge, I heard a young girl playing the flute. I leaned against the railing for a few minutes listening to her play. As I walked away, I tossed a Euro coin into the small box next to her that read, "spende." My translation app told me that "spende" meant donation. 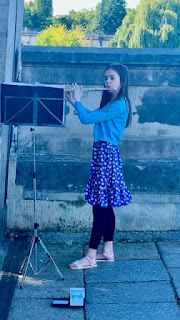 As I walked across the bridge, I was in no hurry to return to the hotel. I had not traveled to Germany to spend my time in a hotel. I wandered through the area's streets and found a several-block-long cobblestone pedestrian lane lined with tall, beautiful trees in an area surrounded by buildings. As I walked along, I heard music and followed the sound until I came to a place where a band was playing in front of a small coffee shop.

I ordered a latte macchiato and sat at a small table under the trees listening to the upbeat, happy music. Even though the songs were in Spanish and I could only pick out a few words, the pop, reggae, latin, fusion was unique and enjoyable. When the band took a break, I went up to talk to them and asked if anyone spoke English. The lead singer spoke English, and we spent a few minutes visiting. He and his band Mikarma were visiting Berlin for the first time, and they had only been in Germany for a couple of days. 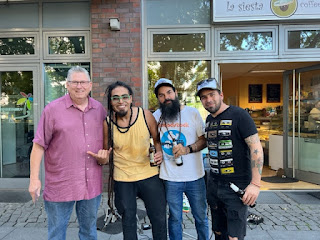 As I made my way through the streets of Berlin on my way back to my hotel, I thought about how disappointed I was to miss the Berlin Cathedral tour. But I realized that If I had made the tour in time, I would have missed out on the experience of listening to and visiting with the band Mikarma. Sometimes what we think to be annoyances can be blessings in disguise. Those times we are late or held up from being where we feel we should be at the time can end up being God's plan for us all along.

Gentle Reader, "people may make plans in their minds, but only the Lord can make them come true." Proverbs 16:1 (NCV) Don't let disappointments in life bring you down. We never know what God has in store for us in the future. "I know what I have planned for you," says the Lord. "I have plans to prosper you, not to harm you. I have plans to give you a future filled with hope." Jeremiah 29:11 (NET)