My An Arkie's Faith column from the August 10, 2022, issue of The Polk County Pulse. 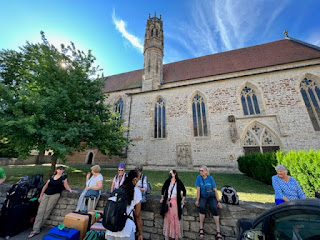 The tour bus drove down the narrow cobblestone street and stopped in front of an old church. Bernd, our tour guide, told us that the church was St. Augustine's Church, and it was built over 700 years ago. In 1277 Augustinian Hermits started to build St. Augustine's Church and the monastery complex. He said, "we will be spending the weekend inside the historic walls and rooms in which monks, including Martin Luther, once lived and prayed."

Our tour had arranged for us to stay at the Augustinerkloster in Erfurt, Germany. It's a working Lutheran church and cloister that is used as a conference center and has 51 rooms for visitors. As I walked towards our room, I soaked in the history of the place and tried to imagine what it would have been like to live here as a monk over 500 years ago.

After settling into the room, I headed out to explore the old town of Erfurt. The area has been inhabited for thousands of years, but no one knows precisely how old the town is. The earliest written records of Erfurt were from 742 A.D., when a diocese was established there. 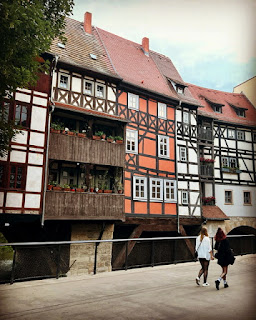 German writer Arnold Zweig described Erfurt's charming old quarter as a "picture book of German history." Somehow, the medieval city center emerged relatively unscathed from World War II, after which it became stuck in the strange cocoon of East German communism for half a century. Because of this, Erfurt has a surprising time-capsule quality. As I walked through the jumble of narrow alleys and open squares, I tried to visualize the same places during medieval times.

I was struck by the picturesque beauty of the Krämerbrücke, or merchants bridge. It's the oldest secular building in town and the longest inhabited bridge in Europe. Half-timbered houses flank a beautiful cobblestone street. The bridge was constructed in 1325, though most of its houses date to the 15th century. 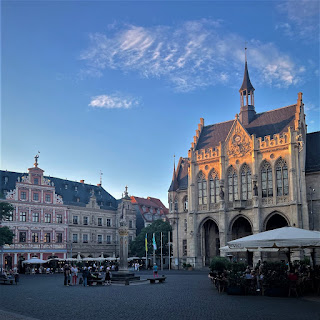 My walk through Erfurt culminated in the vast Cathedral Square, dominated by two old churches. As I sat down and soaked up the scene, The sounds of a busy German square enveloped me. Conversations surrounded me as people ate and socialized at the many open-air restaurants around the plaza. Children squealed with delight while they played. As I sat on a bench watching couples quietly conversing and teenagers congregating nearby, talking with youthful exuberance, I could hear strains of an accordion off in the distance.

I stood and started walking towards the sound of the accordion. It was coming from the other side of the square. As I followed the sound, It took me down a street just off the square. I went to a small stone passageway between two streets. There against the stone wall, stood a woman playing the accordion. As I walked into the corridor, I recognized the song. She was playing La Vie En Rose, one of my favorite songs. Directly across from her were two small café tables. One was empty, so I sat down to listen. 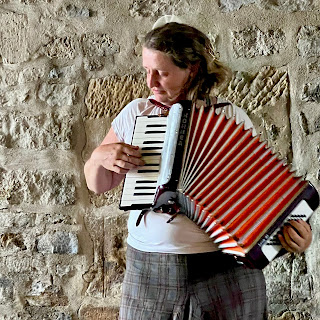 Nothing surprised me anymore about street musicians in Germany. I had heard German, English, Italian, French, Spanish, Ukrainian and Polish music. The accordion is the perfect instrument to accompany French Gypsy Jazz, a genre of music that I have recently become obsessed with. To listen to this music in a medieval German town was surreal. I listened to her play and sing in French for the next half hour. When she finished playing, I walked up to her to purchase a CD. When I spoke to her in English, she excitedly started talking to me. Her name was Brigitte, and she was born in Bavaria. She introduced me to the man sitting at the other café table. He was her cousin, and she was in Erfurt to visit him. It was only the second time in her life that she had seen him. Growing up, they had never seen each other because she lived in West Germany, and he lived in East Germany.

When I told Brigitte that my wife played the accordion when she was younger because her father wanted her to, Brigitte said to me that she had the same experience. Growing up in Bavaria, her father wanted her to play the accordion so she could play traditional Bavarian music. But Brigitte never cared for the music and put down the accordion as soon as she left home. She set out to travel the world and ended up in Scotland. Brigitte told me, "It was in Scotland that I discovered my love and passion for music and started playing the accordion again." She continued, "the street is the most beautiful stage in the world, and I've been playing my way through the streets and alleys of this world for 28 years now."

As I was ready to leave, I asked for a photo of us together. I handed my phone to Brigitte's cousin and posed for a photo with her. Brigitte told him to take a video instead, and she began singing to me. It seemed unreal to hear her sing one of my favorite Scottish songs by Dougie McLean. "But let me tell you that I love you, that I think about you all the time. Caledonia you're calling me and now I'm going home. But if I should become a stranger, you know that it would make me more than sad. Caledonia's been everything I've ever had."

As I walked back to my room at the monastery, I thought about how often our first impressions of people are incorrect or incomplete. As I listened to Brigitte play French chansons in a passageway in a medieval German town, I would have never guessed that her musical passion was Scottish folk songs, or that her family was torn apart by division of Germany after World War II.

Gentle Reader, judging other people based on appearance alone can become second nature to most of us, even when we don't mean to. It can often come down to a thing we all have called unconscious bias, meaning our brains make snap judgments about people without us even noticing. But Christians shouldn't judge a person by their exterior because we don't know their story. "The Lord doesn't see things the way you see them. People judge by outward appearance, but the Lord looks at the heart." 1 Samuel 16:7 (NLT) Don't judge people on their outward appearance. You might be surprised who they really are when you get to know them.

Posted by Richard Lawry at 7:21 AM