My An Arkie's Faith column from the August 31, 2022, issue of The Polk County Pulse. 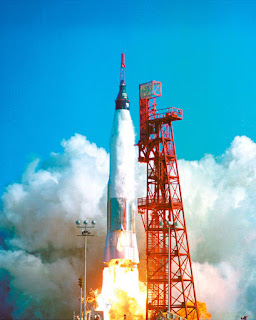 While attending grade school during the 1960s, I had two passions that consumed me. I loved baseball. I chewed lots of awful gum to collect baseball cards. As much as I loved baseball, space exploration intrigued me. My heroes were the astronauts in NASA's space program, and I read everything about them that I could get my hands on. In 1969 my interest in space was at a fever pitch. Everyone was talking about the race to land on the moon. The entire world was captivated when Neil Armstrong and Buzz Aldrin walked on the moon. Every newspaper covered the story. I soaked it all in.

While I went through High School, I stayed interested in space, but there were many other things to interest me and take up my time. By now, there had been six moon landings and one near disaster. In just a few years, astronauts on the moon had gone from the most exciting and talked about thing on the planet to ho-hum, you can drive a vehicle on the moon. I wasn't the only one less excited about the space program. The Apollo 17 mission in December 1972 was the final mission of NASA's Apollo program. With the end of moon exploration, public interest in space exploration waned. 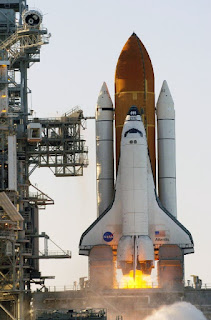 NASA didn't recapture the interest of most Americans until 1981, when the Space Shuttle Columbia made the first flight of a space vehicle that returned to Earth and was reusable. Once again, humans seemed on the verge of conquering the heavens. One of the exciting new directions in space exploration was the Hubble Space Telescope. In 1979 work was started on this new project. After many delays, it launched in 1990. Once again, NASA captured the interest of the American public.

I remember sitting at my new Windows 95 computer with a dial-up modem and waiting several minutes for high-resolution Hubble Telescope images to download. The photos that Hubble produced were breathtaking. When I first saw the pictures, I thought of the words of David found in Psalms 19:1 (AMP), "The heavens are telling of the glory of God; And the expanse of heaven is declaring the work of His hands." 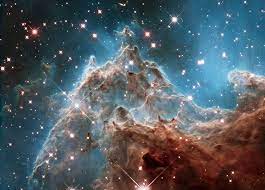 In 1989, even before the Hubble Space Telescope launched, NASA scientists started asking, "what's next?" But it wasn't until the mid-1990s that the idea of an infrared telescope, the Next Generation Space Telescope, was formally proposed and approved.

In 2002, the Next Generation Space Telescope project was officially named the James Webb Space Telescope. James Webb, who ran NASA from February 1961 to October 1968, did more for space exploration than any other government official. He shepherded the agency from the first American manned space flight to circling the moon. By the time Webb retired just a few months before the first moon landing in July 1969, NASA had launched more than 75 space science missions to study the stars and galaxies, our own Sun, and the as-yet-unknown environment of space above the Earth's atmosphere. As early as 1965, Webb also had written that a major space telescope, known as the Large Space Telescope, should become a significant NASA effort. 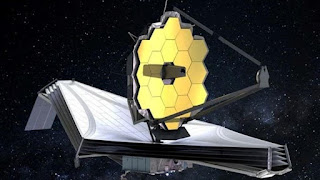 In September 2003, NASA awarded the $825 million contract for James Webb Space Telescope with a planned launch date in 2007. But engineering problems, political hesitancy, and project management issues caused countless delays. In July 2011, Congress threatened to pull funding for the project. After a tense few months, Congress funded the telescope project in November 2011.

By 2017, the telescope was complete, but NASA delayed the launch due to technical issues. In 2018, an independent review board recommended that the launch be moved to March 2021. But the global pandemic created problems for NASA, and delays kept coming. Finally, the James Webb Space Telescope was successfully launched on Dec 25, 2021.

On July 12, 2022, NASA released the first full-color images from the telescope to the public. Although the release of the pictures barely made a blip in the news media, The magnificent photo of the Carina Nebula took me back to my childhood and the excitement I felt about space exploration. Isaiah 40:26 (VOICE) tells us, "look at the myriad of stars and constellations above you. Who set them to burning, each in its place? Who knows those countless lights each by name? They obediently shine, each in its place, because God has the great strength and strong power to make it so." 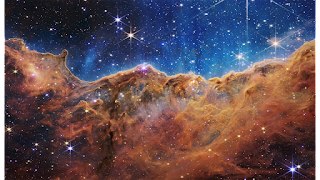 The universe staggers our imagination. It is humbling to realize that our planet earth is simply a speck of cosmic dust in the grand universe God created. David was amazed by God's creation. In Psalms 8:3,4 (NLT), he wrote, "When I look at the night sky and see the work of your fingers, the moon and the stars you set in place, what are mere mortals that you should think about them, human beings that you should care for them?"

When I first became excited by space exploration as a boy, the 200-inch telescope at the Palomar Observatory in California was the most famous in the world. It was a far cry from the telescope built by Galileo in 1609. With each new telescope, from Galileo to the James Webb Space Telescope, we can see more and more in the universe. The effect was awe-inspiring when I experienced the night sky in the Big Bend area of Texas with its almost nonexistent light pollution. There were so many stars visible than I could typically see. There are over two thousand stars visible in a dark night sky. But starting with Galileo, with each improvement in telescope technology, more and more stars have become visible to astronomers.

Gentle Reader, it is the same with the Bible. I have been reading and studying the Bible since I was a boy, but there are still new discoveries. Paul wrote to Timothy, "Since you were a child you have known the Holy Scriptures which are able to make you wise. And that wisdom leads to salvation through faith in Christ Jesus. All Scripture is inspired by God and is useful for teaching, for showing people what is wrong in their lives, for correcting faults, and for teaching how to live right" 2 Timothy 3:15,16 (NCV). Keep studying the Bible; you don't know what discoveries are still waiting for you.