The Most Beautiful Rainy Day Ever

My An Arkie's Faith column from the September 7, 2022, issue of The Polk County Pulse. 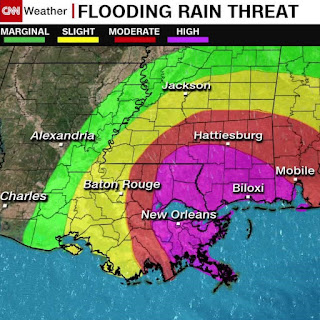 I opened the weather app on my phone and checked the weather for Gulfport, Mississippi. There was an 80 to 100 percent chance of rain every day. We would be traveling to Gulfport for a long weekend in a couple of days. We had been planning our trip for two months. It looked like our weekend at the beach was going to be rainy.

In the forty-plus years that we have lived in Mena, we have never been to the Gulf coast. We decided that we would go to the beach this summer. The Gulfport and Biloxi area was the closest to us, just eight hours away. Two months earlier, I had rented a cute little beach cottage just a few blocks from the beach. We planned a long weekend and looked forward to our beach vacation. 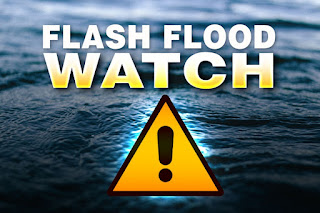 As we left early Friday morning, the forecast hadn't improved. There was a ninety percent chance of rain both Saturday and Sunday, and Gulfport was under a flood watch. It didn't look good for our beach vacation. Our beach cottage rental was nonrefundable, so we decided we would make the best of it. If it rained all weekend and we had to stay inside, we would still have fun.

We stopped on our way through Louisiana to pick up our granddaughter. We had invited her to go with us to the beach, and she was excited about the trip. We told her it would probably rain all weekend, but it didn't dampen her spirits. 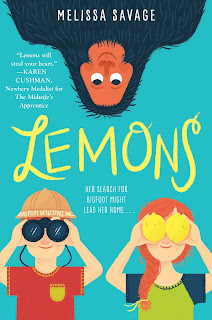 My granddaughter loves listening to books and can often be found with headphones on listening to books on her iPad. We listened to the Audible book Lemons by Melissa Savage as we traveled. The book Lemons is the story of Lemonade Liberty Witt. Her mama always told her: When life gives you lemons, make lemonade. But Lem can't make lemonade out of her new life when she goes to live with her estranged grandfather after her mother passes away.

Then she meets eleven-year-old Tobin Sky, the CEO of Bigfoot Detectives Inc., who is the sole Bigfoot investigator for their small town. After he invites Lem to be his assistant for the summer, they set out on an epic adventure to capture a shot of bigfoot on film. As the story unfolds, Lemonade Liberty Witt is finally able to once again make lemonade from the lemons that life has given her.

My granddaughter was engrossed in the book and didn't like it when the GPS would talk over the narrator. Every time the GPS came on, we would hear a deep sigh from the back seat. Time passed quickly as we traveled, and soon, we drove into Gulfport. Dark, nasty clouds loomed overhead, but there was no rain

We found our beach cottage, and as soon as our luggage was inside, my granddaughter wanted to walk to the beach. As we stepped onto the beach, there was a large flock of seagulls on the sand. As grandma and granddaughter ran towards the gulls, the flock took off with flashes of white and grey filling the sky, their wings beating the salty air. The cries and squawks of the gulls and hundreds of beating wings created an uproar of sound. But soon, they were gone, and the only sounds were the waves lapping on the beach. My granddaughter began searching for shells as we listened to the rhythmic percussion of waves on sand.

I got up early the following day and drove to a good vantage point to watch the sunrise. Large banks of clouds covered the eastern sky, and there was not much color in the sky. But to the north, there were some breaks in the clouds, and most importantly, there was no rain. I checked the weather app on my phone, and there was still an eighty percent chance of rain, and we were under a flash flood warning. The morning had lower rain chances than the afternoon, so we planned to visit the beach if the weather permitted. 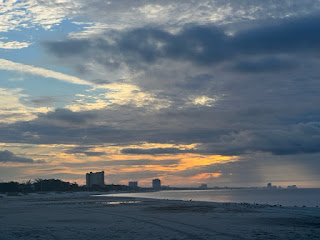 Over breakfast, we talked about our options, and my granddaughter said that she wanted to go to the beach even if it rained. "You get wet in the water," she said, "so what does it matter if we get wet with rain." By the time we got to the beach, the sun was shining, and the sky was bright blue. There were some fluffy white clouds but nothing that was threatening.

After coating ourselves with sunscreen, we spent the next couple of hours enjoying the beach. My granddaughter spent most of her time building sandcastles and looking for shells. As I swam in the ocean, fish were jumping all around me. Sometimes the fish barely broke the surface, but sometimes they jumped two feet straight into the air. Not far from me, a Yellow-crowned Night-Heron fished from a drainage pipe. I watched it catch several fish. 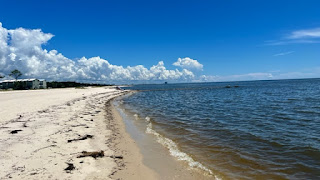 When we were ready to leave the beach, black clouds formed far off to the west. But we had experienced nothing but bright blue skies. We spent the afternoon exploring Biloxi and Ocean Springs but never saw a single drop of rain. After a delicious meal at Salute Seafood and Italian Restaurant in Gulfport, we drove back to our beach cottage. As we drove along the beach, my granddaughter exclaimed, "this was the most beautiful rainy day ever!"

Pastor Charles Swindoll writes, "the longer I live, the more I realize the impact of attitude on life. The remarkable thing is we have a choice everyday regarding the attitude we will embrace for that day. We cannot change our past; we cannot change the fact that people will act in a certain way. We cannot change the inevitable. The only thing we can do is play on the one string we have, and that is our attitude. I am convinced that life is 10% what happens to me and 90% of how I react to it. And so it is with you. We are in charge of our attitudes."

Gentle Reader, our attitudes about our circumstances can help us make lemonade from lemons. Every one of us experiences disappointments and hardships. But how we react makes a huge difference. In Proverbs 17:22 (AMP), the Bible tells us, “A happy heart is good medicine and a joyful mind causes healing, But a broken spirit dries up the bones." Don't let a rainy forecast break your spirit. You might experience the most beautiful rainy day ever.

Posted by Richard Lawry at 7:16 AM