My An Arkie's Faith column from the September 28, 2022, issue of The Polk County Pulse. 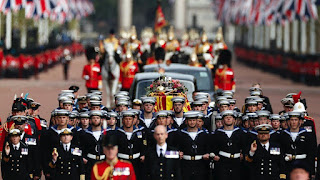 Along with many other Americans, my wife and I watched with viewers worldwide as Great Britain paid a final farewell to Queen Elizabeth II with a state funeral and military procession. Her reign of 70 years and 214 days is the longest of any British monarch and the longest verified reign of any female sovereign in history.

Queen Elizabeth II's coffin was taken in a solemn procession to Westminster Abbey on the State Gun Carriage of the Royal Navy, drawn by 142 sailors. King Charles III walked alongside his siblings, Princess Anne, Princes Andrew, and Edward. The Prince of Wales and the Duke of Sussex followed behind. As the funeral procession entered the abbey, world leaders, politicians, and foreign royalty stood as her coffin was carried up the aisle. 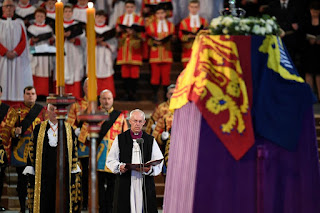 During the funeral service, The Archbishop of Canterbury Justin Welby said: "People of loving service are rare in any walk of life. Leaders of loving service are still rarer. But in all cases, those who serve will be loved and remembered when those who cling to power and privileges are long forgotten." He also spoke of how the Queen had declared on her 21st birthday "that her whole life would be dedicated to serving the nation and Commonwealth." The Archbishop added: "Rarely has such a promise been so well kept. Few leaders receive the outpouring of love we have seen."

A while ago, I came across a quote by the American author, historian, and Unitarian minister, Edward Everett Hale. He said, "I am only one, but I am one. I can't do everything, but I can do something. The something I ought to do, I can do. And by the grace of God, I will." It is an excellent motto for your life. 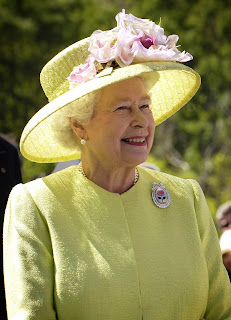 Queen Elizabeth II was in a position of power and influence to make a difference in the world. An article in the online magazine The Conversation stated it this way. "Her wisdom and unceasing sense of duty meant she was widely viewed with a combination of respect, esteem, awe, and affection, which transcended nations, classes, and generations. She was immensely proud of Britain and its people, yet in the end, she belonged to the world, and the world mourned her passing." But most people don't feel that they can make a difference. What can just one person do?

A few years ago. A friend of mine was upset about a situation, and through his actions made a big difference, even though he was an ocean away. I found out what one person can do.

The narrative started back in 1916. The Battle of the Somme was one of the biggest battles of the First World War. Fought near the Somme River in France, it was also one of the deadliest battles in history. On July 1, 1916, 19,240 British soldiers lost their lives. It was the bloodiest day in the history of the British army. 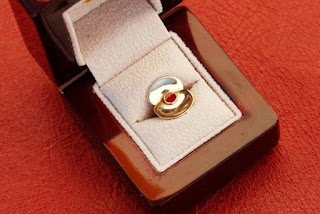 July 1, 2016, marked the 100th Anniversary of the start of the Battle of the Somme. As a tribute to these soldiers, the British Royal Legion issued 19,240 hand-crafted solid brass limited edition golden poppy lapel pins, one for each British soldier who lost his life that day. Each pin came with a certificate featuring details of the individual soldier it commemorated.

The intricate golden pins were made from the brass of melted-down shell fuses found on the Somme battlefields and feature a prominent red center, painted with paint mixed with soil from the same fields. The British Royal Legion sold the pins for £39.99, with all proceeds being used to provide care and support for members of the British Armed Forces and their families. Unsurprisingly the poppies sold out within hours.

My friend, whose Grandfather fought during World War I, tried to purchase one but was unsuccessful. He looked on the British Legion site, but they had all sold out very quickly. He thought, "I bet someone is trying to profit off that," so he looked on eBay and found that there was already one listed, selling for nearly £400.

He said, "one of the sellers I contacted first was so mean and arrogant it just got me angry. It upset him to see opportunists making huge profits off something that had such meaning. He told me, "My Grandfather was in the Cavalry in the great war. The slaughter was incredible as humans fought the first real mechanized war. It was supposed to be the 'War that ended Wars.' Sadly, as we know, this was a forlorn dream." 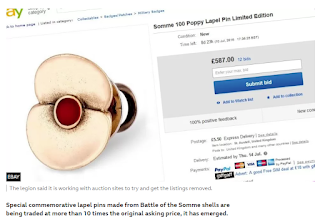 In Zechariah 7:9 (GW), God tells us to "be compassionate and kind to each other." Imagine what a difference you could make by simply being kind to others. Several years ago, my young granddaughter walked up to a woman at church and gave her a big hug. This woman lived alone and had a prickly personality. She kept people at a distance. All day long, she kept telling people, "That child hugged me. No child has ever done that before." A simple hug made a difference in her life.
Gentle Reader, small acts of kindness have changed the hearts and minds of others. You can make a difference even if you do not have the power and influence of a monarch. You can influence someone even if you are not a social media influencer. You may be only one, but the power of one can be significant. You can't do everything, but you can do something. Look for opportunities to serve others and find opportunities to thank those that are of service to you. Your gratitude is an act of kindness toward others and can profoundly impact someone. The power of one can change the world! Let kindness and compassion be your superpowers.
Posted by Richard Lawry at 2:30 AM