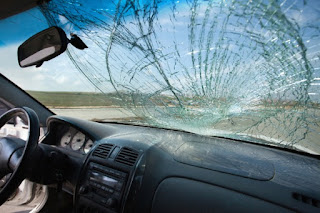 My job is installing windshields. Most windshields today are bonded to the vehicle with an automotive grade urethane designed specifically for auto glass installation. The urethane adhesive creates a molecular bond between the glass and the vehicle. I use a high viscosity moisture curing black urethane. Urethane is thick and sticky and bonds to almost anything. If it comes in contact with your hands or your clothes it is difficult to remove and it will stain. 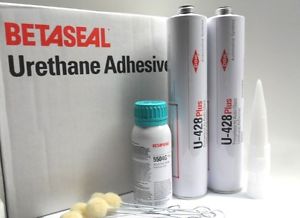 During the replacement of a windshield, after the old windshield is removed, most of the existing urethane adhesive is removed from the pinchweld leaving a thin film for the new urethane to bond to. The urethane comes in a caulking tube and is applied through a triangular shaped notch cut into the tip of the caulking tube. After the urethane is applied to the pinchweld, the new windshield is carefully positioned into the urethane and pressed into place. The urethane stays sticky for quite a while before it cures and becomes hard. If you get urethane on your hands during the process, you will have stains that can’t be easily removed. 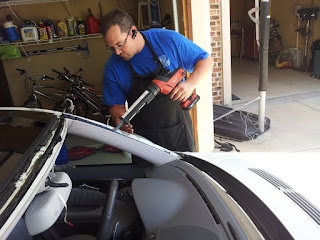 When I was fairly new to the business I was talking to a long time technician and asked him if he had any secrets for removing urethane from his hands. He said, “Point your hand north, then south. Then wait a week and I promise the stain will be gone. This is the only method that works. I'll recommend it to anyone.” In other words, only time will wear it off. Over the years I have had many people recommend products to me that they were sure would remove urethane from my hands. None of them work.

One day a customer was watching while I was installing his windshield. The urethane that I was using seemed irresistible. He just had to touch it. He got some of the urethane on his hand. He didn't want me to know he had touched it. I noticed he was quietly rubbing on his hand with a shop towel. If you try to wipe urethane off, all it does is smear and make a bigger mess. When I noticed his problem, I offered him some solvent that helps clean the urethane up. He said, “No thanks, I don’t need any.” 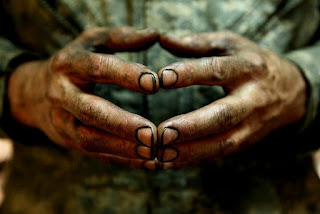 As I worked, I noticed him continuing to try to clean up. By this time he had gotten the urethane on both of his hands and had also gotten it on his coat. Urethane doesn't come out of clothes. Finally after observing his attempts to clean himself up and seeing how big a mess he was making, I just got a shop towel and soaked it in solvent and gave it to him. By trying to clean it up himself he had made a monumental mess. Have you ever made a big mess of your life by trying to clean things up yourself? I know I have.

As silly as it seems, there are many Christians who have the same attitude as the man in this story. Their hands are dirty and stained with sin, and yet when offered God’s saving grace they say, “no thanks, I don’t need any.” They try and try to clean themselves up. Paul tells us in Romans 6:23 (NLT) , “For the wages of sin is death, but the free gift of God is eternal life through Christ Jesus our Lord.” 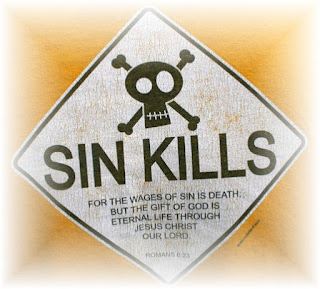 Even though the consequences of having hands stained with sin are so clearly stated, some Christians feel that they can clean themselves up by their works. Isaiah 64:6 tells us that when we display our righteous deeds they are nothing but filthy rags. Why would we try to clean ourselves up when Jesus has promised to forgive us and clean us up? Why would we ever think that we would have the ability to make ourselves clean?

King David when he was confronted with his sin by the prophet Nathan admitted that his hands were dirty. In 2 Samuel 12:13 (NLT) the Bible tells us, “Then David confessed to Nathan, ‘I have sinned against the Lord.’ Nathan replied, ‘Yes, but the Lord has forgiven you, and you won’t die for this sin.’” 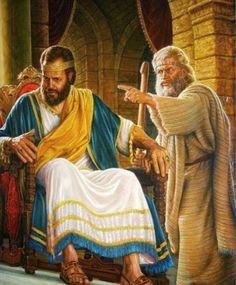 After this experience David wrote the 51st Psalm. In it he repeatedly talked about God’s cleansing. Verse 2 (NKJV), “Wash me thoroughly from my iniquity, and cleanse me from my sin.” Verse 7 (NIV) “Cleanse me with hyssop, and I will be clean; wash me, and I will be whiter than snow.” Verse 10 (NKJV) “Create in me a clean heart, O God.” David knew that he couldn’t clean himself up. He knew that only God could wash him and cleanse him. Only God could create a new heart in him.

1 John 1:9 (NKJV) tells us, “If we confess our sins, He is faithful and just to forgive us our sins and to cleanse us from all unrighteousness.” Gentle Reader, Jesus has offered to forgive us of our sin, no matter what it is, and He has promised to clean us up. Let’s take him at his word.

Posted by Richard Lawry at 8:03 AM