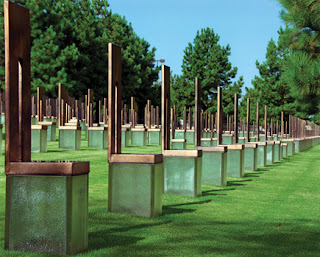 Several weeks ago we spent the weekend in Oklahoma City.  While we were there we visited the Oklahoma City National Memorial.  The memorial honors the victims and the survivors of the 1995 bombing of the Murrah Federal Building .

On the morning of April 19, 1995, Timothy McVeigh parked a rental truck with explosives in front of the Murrah Federal Building and at 9:02am, an explosion destroyed much of the building, killing 168 people. 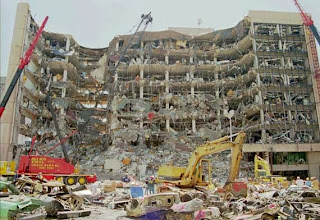 The site is now home to the Oklahoma City National Memorial.  As we walked among the 168 chairs that represent the lives lost I began to feel a profound sadness. The chairs stand in nine rows to represent the nine floors of the building, and each chair bears the name of someone killed on that floor. Nineteen smaller chairs stand for the children who died in the blast.

The memorial is beautiful at night with subdued lights visible in the crystal bases of the chairs.  In front of the chairs is a reflecting pool between two twin gates.  Across the street from the Memorial, Saint Joseph Catholic Church has erected a white stone statue of Jesus that shows Him with His head bowed, standing with His back to the memorial, and with His right hand over his face. The words "And Jesus Wept" are engraved on the granite base. 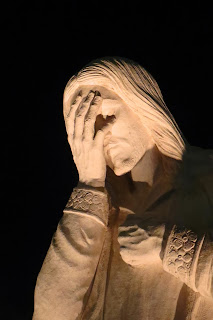 I had wanted to visit the memorial because of my love for history, but never expected the experience to be so emotional.  That night sleep wouldn't come as I thought about those terrible events of April 19, 1995.  After I finally went to sleep, I dreamt about the bombing and woke up frequently.  I didn't sleep well at all.

The memorial had done its job.  You see the purpose of any memorial is to get us to remember the event and or people that it is memorializing.  Before that night when I visited the Oklahoma City National Memorial I hadn't thought about the bombing for a long time. After seeing the memorial I was focused on the event and the people it represented. 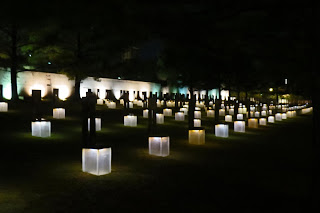 A memorial is something that serves as a focus to help remember an event.  Are there memorials in the Bible?  There is a memorial right in the Ten Commandments.  Exodus 20:8-12 says,  “Remember the Sabbath day, to keep it holy. Six days you shall labor and do all your work, but the seventh day is the Sabbath of the Lord your God. In it you shall do no work: you, nor your son, nor your daughter, nor your male servant, nor your female servant, nor your cattle, nor your stranger who is within your gates. For in six days the Lord made the heavens and the earth, the sea, and all that is in them, and rested the seventh day. Therefore the Lord blessed the Sabbath day and hallowed it”. 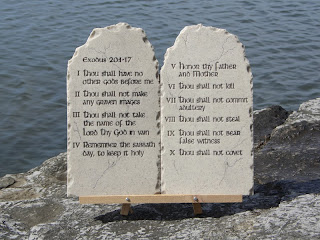 On the seventh day of creation, God blessed and sanctified the seventh day.  It is a memorial of creation.  Many people no longer believe that God created the world in seven days.   If we deny that God is the Creator, we have no reason to worship God. 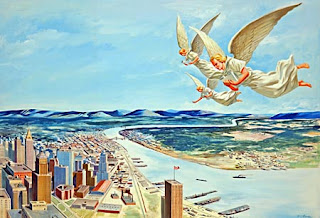 One of the main topics of the book of Revelation is worship.  The first angel’s message in Revelation 14 includes a call to the world to worship God as our Creator.  Look at Revelation 14:6,7.  It says, “And I saw another angel fly in the midst of heaven, having the everlasting gospel to preach unto them that dwell on the earth, and to every nation, and kindred, and tongue, and people, saying with a loud voice, ‘Fear God, and give glory to Him; for the hour of His judgment is come: and worship Him that made heaven, and earth, and the sea, and the fountains of waters.’”  God wants a people who will worship Him as Creator.

To reject the literal account of creation as found in Genesis is to reject not only Old Testament worship but New Testament worship.   In Romans 1:24,25 the Bible says,  “Therefore God also gave them up to uncleanness, in the lusts of their hearts, to dishonor their bodies among themselves, who exchanged the truth of God for the lie, and worshiped and served the creature rather than the Creator, who is blessed forever. Amen.

When we deny God’s creative power we end up worshiping the creation instead of the Creator.   Ephesians 2:8 says, “For by grace you have been saved through faith, and that not of yourselves; it is the gift of God.”  And Hebrews 11:3 tells us that, “By faith we understand that the universe was created by the word of God, so that what is seen was not made out of things that are visible”.  Faith is important to the Christian, and by faith we understand that God created the universe.

Creation is important; It is the reason we worship God, and the seventh day has stood as a memorial to God’s creative power from creation week until today.

Posted by Richard Lawry at 5:04 PM