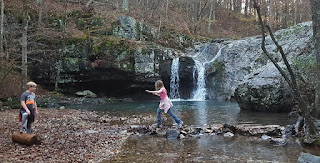 The warm sunshine filtered through the trees as we made our way from the trailhead to the Falls Branch Trail. It was a beautiful November day with temperatures in the seventies. After the second day of Thanksgiving dinner that couldn’t be beat, our family was excited to get outside and get some exercise. We had made plans to visit Garvan Woodland Gardens and see the Christmas light display. Since we were driving to Hot Springs to go to the gardens, we wanted to find someplace to take a short hike while we waited for the sun to go down.

We referred to our book, Arkansas Dayhikes for Kids and Families, by Pam, Tim, and Amber Ernst. We chose to hike the Falls Branch Trail at Lake Catherine State Park. The book told us that the hike to the Falls Creek Falls “is an easy stroll along the lakeshore.” An easy stroll to a waterfall was just the hike that some of us older folks in the group thought sounded good. 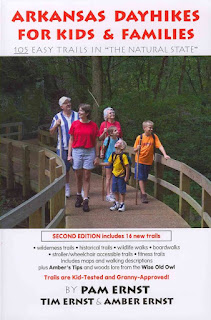 The book went on to explain; “There are several trails that take off from the trailhead, but the one that you want is the Falls Branch Trail that goes down near the lake shore. It heads out through some nice big trees, crosses a road near the camping area, and goes over a foot bridge—you are following the white blazes. (There are actually three different trails that share the first part of the route, so you will see different color blazes on the trees).”

When we arrived at Lake Catherine, we followed the road to the campground where the trailhead was located. As we were heading down the path to the trail, I volunteered to run something back to the car. “I will catch up to you,” I said to the others. When I made it back to the place where the trails start, there was a sign that showed Falls Branch Trail with its red blaze taking off to the right along with a yellow blaze for the Horseshoe Mountain Trail. To the left, it showed a white blaze for the Dam Mountain Trail. I studied the sign for a minute and thought about the conflicting information in my mind. I knew that I wanted the Falls Branch Trail, but it went to the right, and I was pretty sure that when I had looked at the map, I needed to go left. I didn’t have a map with me or the hiking book. 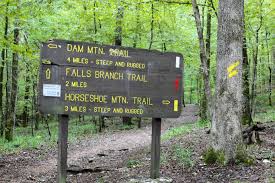 As I was standing there trying to decide which way to go, I remembered something from the hiking book quite clearly. It had stated, “you are following the white blazes.” Even though the sign said Dam Mountain Trail, I decided that it had the correct blazes, and it was going the correct direction. I headed down the trail with the white blazes. It wasn’t long before I reached the waterfall. It is less than three-quarters of a mile from the trailhead to the falls. When I arrived, I was puzzled. Where was the rest of my group? I hadn’t seen them on the trail, so I assumed that they were already at the falls.

After waiting at the falls for fifteen minutes, I called to find out where the rest of my group was. I found out that because a part of the trail traveled over steep slippery rocks, some of the group had turned back and were now back at the car. The rest of the group was still hiking. They assured me that they were on the Falls Branch Trail. At the trail marker sign, they had taken the trail to the right with the red blazes. When they had reached the sign, they too were puzzled. They thought that they remembered that the trail to the falls went to the left, but the sign clearly showed that Falls Branch Trail went to the right. So, they choose the trail to the right with the red blazes. 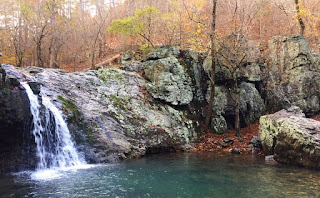 After comparing notes, we figured out what had happened. Falls Branch Trail is a loop trail, and they had taken the long way around to the falls while I had taken the trail in the opposite direction, arriving at the falls much sooner. How could we have been so confused about this simple trail? We had both looked at the trail map. We had both read the hiking book. But we didn’t have either the map or the book with us as we hiked. The information that wasn’t made clear on the sign, or in the book was that from the trailhead to the falls in the direction that I had hiked, Falls Branch Trail and Dam Mountain Trail are the same trail, with the two trails diverging at the falls.

By the time the rest of the group reached the falls, our daylight was fast slipping away. After enjoying the beauty of the falls and taking photos, we had to hurry back to the trailhead before it got dark.
How is it that people who have read the same information can come to different conclusions? In this case, it was which part of the information we chose to emphasize. I chose to focus on the blaze color even though it contradicted with the trail name. The other group felt that the trail name was the most important thing. 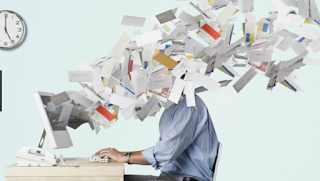 Gentle Reader, in this age of information overload, your decisions in life are affected by the information you choose to emphasize. Proverbs 2:8-11 (NLT) tells us that God “guards the paths of the just and protects those who are faithful to him. Then you will understand what is right, just, and fair, and you will find the right way to go. For wisdom will enter your heart, and knowledge will fill you with joy. Wise choices will watch over you. Understanding will keep you safe.” To make the best choices in life, choose to emphasize the information that God has given us in the Bible. “Your word is a lamp to guide my feet and a light for my path.” Psalms 119:105 (NLT)

Posted by Richard Lawry at 7:20 AM