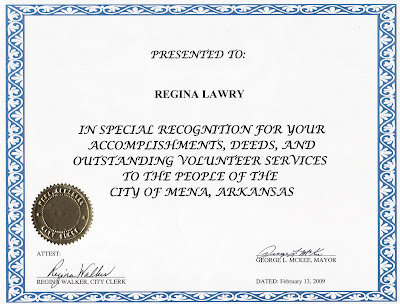 I have attended my first Chamber of Commerce Banquet. The Mena Chamber of Commerce put on a very nice banquet at the old historic armory building. There were a large number in attendance, many more than in the past. The meal was catered by a new Italian restaurant here in town called Spinelli's. The food was great, but they were a bit slow because of the large attendance. We were at County Judge Stanley's table with him and his wife Vicki and our good friends Lisa and Dalton Doughty. We had a great time visiting and laughing. Who knew a banquet could be so much fun.

GINA WITH HER FRIENDS VICKI AND LISA

I had mentioned going to the banquet a month ago, but Gina wasn't that excited about it. "Why do you want to go", she asked. I couldn't tell her the real reason. The Chamber had let me know that Gina was going to be receiving an award from the Governor, but they wanted it to be a surprise. She finally said she would go to the banquet if I wanted to. When they were presenting different awards, Gina was talking with her friends and not listening that closely. When they called out her name, her jaw dropped and she sat there for a moment in disbelief. After a bit of a nudge, she went forward and received her award from Senator Larry Teague. 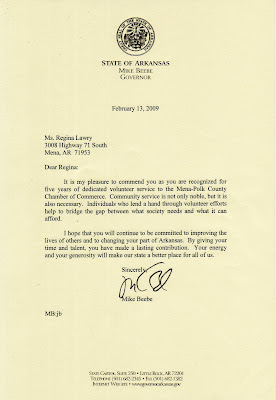 It is my pleasure to commend you as you are recognized for dedicated volunteer service to the Mena-Polk County Chamber of Commerce. Community service is not only noble, but it is also necessary. Individuals who lend a hand through volunteer efforts help to bridge the gap between what society needs and what it can afford.

I hope that you will continue to be committed to improving the lives of others and to changing your part of Arkansas. By giving your time and talent, you have made a lasting contribution. Your energy and your generosity will make our state a better place for all of us.

To say that Gina was surprised and excited would be an understatement. It was fun to be able to surprise her.

GINA AND I AT THE BANQUET
Posted by Richard Lawry at 8:54 PM