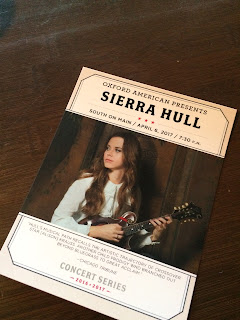 Back in January my wife and I attended a concert at South on Main in Little Rock, Arkansas. Our favorite band, Smokey and the Mirror, was opening for Dylan LeBlanc. South on Main is a restaurant and performance venue featuring the best of Southern cuisine and culture. The food was amazing and the music venue is great. We enjoyed the venue so much that I checked out the concert schedule to see who would be appearing at upcoming concerts.

Sierra Hull was scheduled to appear on April 6th. I listened to her music on Spotify and decided that we would enjoy hearing her in concert. When the tickets went on sale I was able to purchase tickets at the table directly in front of the stage. 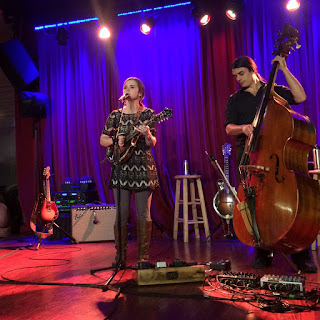 We enjoyed the concert more than we could have ever imagined. Sierra and bassist Ethan Jodziewicz are simply the best at their instruments. Even though they both are virtuoso's on their instruments, the mandolin and the bass, the live show takes on a minimalist approach. Being in the audience felt more like sitting in a living room listening to friends play music for you than being at a concert. 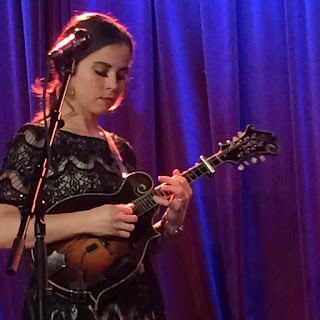 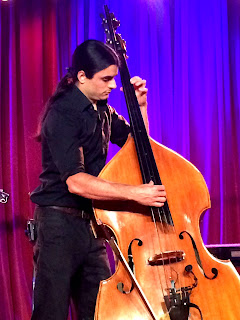 The sound quality of the concert was phenomenal. Every nuance of the music could be easily heard, but the sound was acoustic - never sounding amplified. Acoustic music that is over amplified is a pet peeve of mine. Sierra and Ethan played a wide range of music focusing on her Grammy-nominated album Weighted Mind but also including some traditional bluegrass numbers, classical music, and covers such as People Get Ready, the Tears For Fears song Mad World, and an amazing encore - Prince's 1999.

It is hard to pick a favorite song from an evening where every number was extraordinary but Sierra's song Lullaby from the Weighted Mind album is not only beautiful, but is achingly personal.

Sierra played for two hours and the time flew by. I didn't want the concert to end. It was obvious that she and Ethan were enjoying themselves as much as the audience was. When they came back out for an encore they partied like it's 1999.

After the concert, Sierra visited with anyone who wanted to talk to her, signing autographs and taking photos. When I posted a comment on her social media about the concert, she replied, remembering specifics of our conversation. If you ever have a chance to see Sierra Hull live, I highly recommend it. 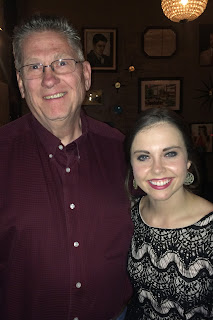 More music from the South on Main Concert