This eulogy, written by Linda Borton McCabe, was read by Tom Borton at LeRoy Borton's memorial held on Sunday, May 13, 2018, in Keene, Texas 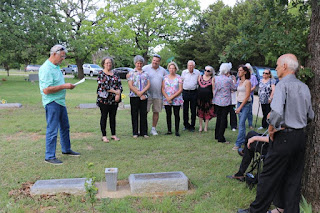 As the firstborn of five children, he spent his growing up years on farms in Missouri and Michigan, where he developed an early love for cars, trucks, tractors, and anything motorized. He began driving farm trucks almost before he could see over the dashboard, and it was said that if a truck came down the road and you could not see anyone behind the wheel, it was probably LeRoy.

Those were hard years, but living on the farm and growing a large garden enabled them to always have enough to eat, as well as having lots to keep him and his 3 brothers and one sister busy.

LeRoy attended high school at Adelphian Academy in Michigan and Sunnydale Academy in Missouri, followed by a year at Union College in Lincoln, NE. He then finished his degree in chemistry at Madison College near Nashville, where he and his classmates were known for their practical jokes. Including one very famous water fight that started with syringes being poked through the flimsy wall between the hospital darkroom and the X-Ray department, to spray unsuspecting people, but which ended with buckets of water being thrown and a LOT of water on the X-Ray department floor.

While in school, he and a few friends pooled their money to buy a boat to use on the nearby Cumberland River. It took all their spare time to keep it running—in fact, they spent more time working on it than riding in it, and in keeping with their chosen field, they named it the “Bloody Corpuscle”

After graduating in 1957 as a Lab and X-Ray technician, now with a wife and brand-new baby girl to support, LeRoy took a job in El Campo, TX. But within a year or so, he was recruited by a group of doctors to run the lab in their clinic up in north-east TX—in the little town of Paris. A tiny 2-bedroom bungalow was purchased for the growing family—which soon included another daughter and then after that, a son.

LeRoy freelanced on the side by doing lab work on weekends for some small hospitals in neighboring rural counties, which had no weekend staff in their labs. The specimens would be packed up and put on the bus that ran between towns. LeRoy would go to the bus station and pick them up, take them to his lab and run the tests that were needed. These were the days when frogs lived in the lab refrigerator to be used as pregnancy tests—which was a huge medical advancement over the rabbits that had been required when he was in school.

Life was good, and with a growing family needing more space, property was purchased and cleared just outside of town, and a modest brick rancher took the place of the tiny bungalow.

Then on July 8, 1968, everything changed. On a family vacation to California, a mechanical malfunction caused the car to skid off the road and roll 2 ½ times, tossing the family around like rag dolls and ending LeRoy’s walking career on the side of the road, north of Flagstaff, AZ. He was just 34 years old.

Trauma medicine, especially following a spinal cord injury, was not what it is now, and his chances of survival were not good for the first few days. After a few weeks, surgery was done to insert stainless steel rods in his back to stabilize his very jumbled spinal column, and a few months after that he was sent to rehab, to learn to make the best of what muscles he had left and to figure out what to do with the 15 short years he was told was all he could expect out of life.

Braces from shoe to waist could stiffen his legs so he could stand, and crutches could help him move along with a lurching, dragging motion, but LeRoy quickly decided that they were not worth the energy, and to focus on developing his strengths—his arm and shoulders. His grip strength was legendary, and all the way into his 70’s, he could still get out of his chair, down to the ground and back up again all by himself.

Once home, the first order of business was to get a car with hand controls so he could drive again since no one wanted to put up with his backseat driving. Unable to return to his job, partly because the countertops were all too high for him to reach, and partly because the phantom pain he was left with was constant and excruciating, the family began searching for a solution to the pain that didn’t involve narcotics. LeRoy used to say that the pain in his legs was caused by his back but was actually all in his head since his legs could have been amputated and it still would have felt to him that they were in pain.

The staff at a natural treatment facility near Chattanooga, TN discovered that putting ice on the site of the spinal cord injury cooled the damaged nerves enough so he could sleep without pain meds, so for 15 years—until an experimental laser surgery relieved 90% of his pain—he slept on frozen ice packs every night. But during the day, he needed something to keep his mind off how badly he was hurting, so he went back to his first love—fixing cars and making things run.

The small community in TN where they now lived had plenty of cars that needed fixing, so LeRoy could always be found up under the hood or down on the ground underneath a car, asking the nearest person, young or old, to hand him this or that tool. A couple generations of adolescents and teenagers learned how to change brakes, starters and alternators under LeRoy’s watchful eye. And if the bolt wouldn’t budge, he was known to say “Am I going to have to get down there and do that?” which would result in extra struggling and grunting and hopefully success on the part of the often skinny and usually very young apprentice.

When it came to anything motorized, LeRoy had great troubleshooting skills. He could listen to an engine and diagnose a problem, and could usually figure out a way to fix it. Once his kids had left the nest, he remained on call as their “dial-a-mechanic”. They would call from a pay phone from several states away and he would say “Well, I can’t tell you for sure but I think it might be…” and he was usually right! Rarely did he have to personally go rescue them, since he had taught them to do basic mechanics on their own, but he once drove all night from New Hampshire to Scranton, PA to get his 17 and 19-year-old daughters back on the road when the lug bolts sheared and the wheel came off a trailer load of apples they were hauling to West Virginia.

Speaking of driving, LeRoy put on tens of hundreds of thousands of miles, crisscrossing the country, searching for car parts, pulling cars and pieces of cars behind him on tow dollies and trailers and visiting family and friends along the way. His adventures on the open road were many. From chasing and retrieving a spare that got away as he was changing a tire—alone—on the side of the road, to descending a flight of stairs one-by-one, dragging his chair behind him, when he ended up on the second story and no one was available to help him down and he was ready to leave. He refused to believe that there was anything he couldn’t figure out how to do, with a little ingenuity and some time.

Coming from large, close family, LeRoy had over 40 first cousins, so nearly everywhere he went, he had family or friends he could stop in and see. And since he loved collecting and then passing on all the latest news and gossip, LeRoy was facebook before facebook was even thought of! It was a family joke that he would go out of his way across 3 states to visit even a shirttail relative. LeRoy loved his friends and family.

There were two things that LeRoy had. He had a huge heart and he also had a very hard head.  From driving all night from OK to TN to make sure a teenager got to say goodbye to her dying grandfather to going out of his way to deliver cars, rototillers, woodchippers and lawn tractors to his family and friends all over the country, he was willing to go the extra mile to help someone in need.

But he had his flaws as well, and his hard head could make life interesting for those closest to him. His freedom and independence were of primary importance to him, and as he often said (and lived it as well) “LeRoy is not going to do what LeRoy doesn’t want to do”! He lived life on his own terms, far outliving the expectations for a paraplegic, but in the last few years as injuries began to limit his mobility and independence more and more, it was hard for him. And once the doctor told him he had cancer, with no chance of a cure, he told her “It’s time for me to go”, and 18 hours later he was gone. Still on his own terms to the very end.

He leaves behind, to miss his huge heart, three surviving siblings—Tom, Clyde and Myrtle, three children—Loni, Linda and John, four grandsons and one great-granddaughter. Plus a lot of cousins, nieces, nephews and friends. He will be missed.