My Most Unforgettable Character 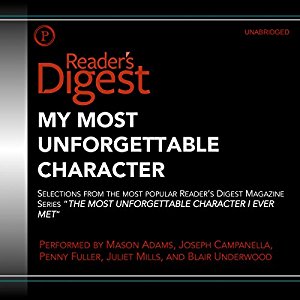 When he was thirty-four years old, a car accident left LeRoy paralyzed from the waist down. His chances of survival were not good for the first few days. After a few weeks, doctors inserted stainless steel rods in his back to stabilize his spinal column. The accident left him with constant, excruciating pain for many years, until an experimental laser surgery relieved ninety percent of his pain. He was told that at best he had fifteen years to live, but he proved the doctors wrong, living an amazing life; remaining very active until shortly before passing away at the age of eighty-three. 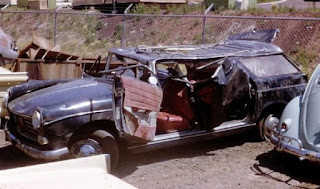 LeRoy lived life on his terms, far exceeding the expectations for a person with paraplegia. His freedom and independence were very important to him. For many years he refused to be tied down to driving with hand controls. He didn’t even want to drive an automatic. To him, it was like admitting defeat. He would drive a manual transmission by using a cut off shovel handle in each hand, leaning forward into the steering wheel with his chest. Over the years he drove hundreds of thousands of miles across the United States, searching for car parts, pulling cars on tow dollies and trailers, and visiting family and friends along the way.

One of my favorite stories about LeRoy’s driving happened when he was driving a Mazda RX-7 cross-country to deliver it to California. As he was driving across Arizona, the road was straight, and you could see for miles. The was no traffic, and LeRoy liked to drive fast. He had the cruise control set at 110 mph. LeRoy never saw the cop, but the cop saw him and pulled him over for speeding. When LeRoy handed the cop his driver’s license, the cop noticed that the license was for hand controls only. He asked LeRoy about it, and LeRoy showed him the sawed-off shovel handles that he used to press the pedals. The cop just shook his head and told him to slow it down a bit and let him go on his way.

Not all patrolmen were as understanding. For several years whenever LeRoy was driving between Hot Springs and Little Rock, he avoided Highway 70 and drove 20 miles out of his way to avoid that section of highway. He had a couple of encounters with a hard line patrolman who had no mercy for the fact that LeRoy drove without hand controls. The last time he stopped LeRoy, the cop wasn’t going to let LeRoy leave because he didn’t have hand controls. As LeRoy politely conversed about the situation with the cop, the cop said, “I should just take you to jail.” LeRoy answered, “why don’t you just do that. I’ve got nothing I have to do, and I could use a place to stay and three meals a day.” When the cop couldn’t get ahold of anyone to impound LeRoy’s car, he let him go but said, “if I ever catch you again I will send you to jail.” LeRoy must have believed him because for several years he would not drive on that stretch of road. 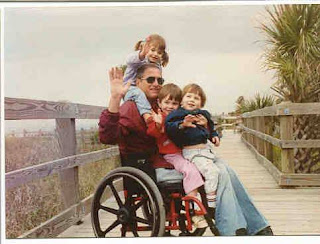 LeRoy spent many years in Mena and was a big part of our family’s lives. He spent much of his time while he was in Mena at my shop. He loved to be involved with cars. In the days before the internet, LeRoy was the internet for many of us in the car business. He had a little black book of contact information for most of the salvage yards in the Tennessee, Arkansas, Missouri, Oklahoma and Texas area. He would find, order and pick up parts for me, my Dad, my uncle, and many other friends in the Mena area. He knew just about anyone who was in the car business in Mena and offered his services to anyone. Many days I saw him sit in my shop and spend the entire day on the phone with salvage yards hunting parts.

Recently, a mutual friend told me the story of the first time he met LeRoy. My friend had a body shop in Mena and rebuilt a lot of wrecks. He had just purchased a car in Dallas and asked my Dad if he knew anyone who would be willing to haul the car to Mena. My Dad said that he had a cousin who would probably be able to get the car. My friend talked to LeRoy on the phone and made the arrangements for him to pick up the car. When Leroy pulled up in front of my friend’s shop with the car, he got out and was unloading the car off of the trailer. My friend had no idea that LeRoy was in a wheelchair when he had hired him to pick up the car. It was a big surprise to see a man in a wheelchair unloading the trailer. He went outside and asked LeRoy if he needed help getting the car off the trailer. LeRoy answered matter of factly, “no, I’ve got it.” 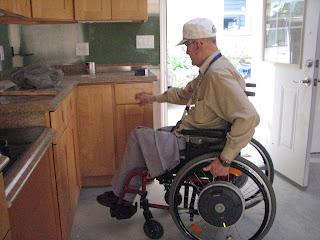 In all of the time that I spent with LeRoy over the years, I never once heard him complain about his situation. It seems to me that James 1:12 (NIV) was written especially for LeRoy; “Blessed is the one who perseveres under trial because, having stood the test, that person will receive the crown of life that the Lord has promised to those who love him.” Hebrews 12:1 (KJV) asks us to “run with patience the race that is set before us.” LeRoy's life is an example of doing just that.

Gentle Reader, whenever things are a bit tough and aren’t going the way I would like them to, I always think about LeRoy and how he handled the challenges that life gave him. His optimism and cheerfulness in the face of very difficult situations impressed me. Like Job, he seemed to say, “I decided to forget my complaints, to put away my sad face and be cheerful.” Job 9:27 (NLT) His determination to do things for himself and not be a burden to others was evident to anyone who knew him. I’m sure that I am not the only person who counts LeRoy as their most unforgettable character.

After LeRoy's memorial, an old college friend of his wrote; "LeRoy would stop in to see me as I moved around the country, I visited him in the rehab a few weeks before he died. Upbeat to the end. Every time after a visit I had the same prayer, "Lord, forgive me for complaining about ANYTHING." 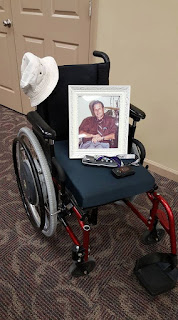 You can read more about LeRoy's life here.
Posted by Richard Lawry at 6:28 AM