It Is Well With My Soul

Last week, in our weekly Bible study group, we started by watching a video produced by La Sierra University music students who performed a beautiful arrangement of the hymn, “It Is Well With My Soul.” The music video tells the story of how Horatio Spafford was inspired to write the lyrics to this classic hymn.

Horatio was a prominent Chicago lawyer. He owned several properties throughout the city. He and his wife had four beautiful daughters and one son. Horatio was a successful lawyer, and with his real estate investments became a very wealthy man. But suddenly things began to go very wrong for Horatio. It began with the tragic death of his young son. Then he lost everything overnight when the great Chicago Fire of 1871 destroyed most of his real estate holdings.

Two years later, Horatio with his wife and four daughters planned a vacation in Europe. At the last minute, Horatio had to stay behind to deal with some financial problems, so he sent his wife Anna and their four daughters on ahead to France. Halfway across the Atlantic Ocean, their ship was struck by another ship. Anna Spafford led her girls to the top deck where they tried to get into a lifeboat. Just twelve minutes after the accident, the bow broke, and they were swept into the frigid water of the Atlantic Ocean as the ship sank. A lifeboat later found Anna floating unconscious on a piece of wood. 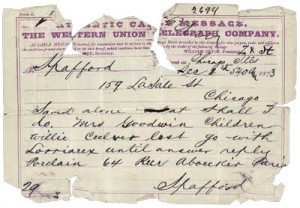 Horatio received a dreadful telegram from his wife, “Saved alone…” It bore the terrible news that the ship had wrecked and all four of his daughters had died.

After receiving the telegram from his wife, Horatio immediately booked passage to Wales to bring his wife home. On the Atlantic crossing, the captain of the ship called Horatio to his cabin to tell him that they were passing over the spot where the ship had sunk. While he was in the area of the ocean where his daughters had perished, Horatio penned these words. “When peace, like a river, attendeth my way, when sorrows like sea billows roll; Whatever my lot, thou hast taught me to say, it is well, it is well with my soul.” It is hard to believe that such encouraging and uplifting words were written at a time of such unimaginable sorrow. Horatio Spafford is an example of amazing faith and trust in God.

After watching the video, we began our study of Matthew chapter 8. “Large crowds followed Jesus as he came down the mountainside. Suddenly, a man with leprosy approached him and knelt before him. ‘Lord,’ the man said, ‘if you are willing, you can heal me and make me clean.’ Jesus reached out and touched him. ‘I am willing,’ he said. ‘Be healed!’ And instantly the leprosy disappeared.” Matthew 8:1-3 (NLT) I was drawn to the similarities between this leper and Horatio Spafford. Both men were going through times of great difficulty, but both of them showed great faith and trust in God. 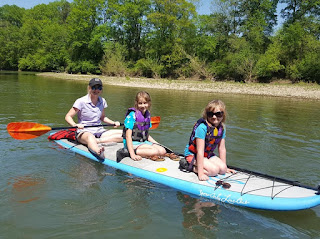 We picnicked at the Rocky Shoals Access to the Ouachita River just off of Highway 270. It was a beautiful sunny day, and it was warm without being too hot. We stayed there for some time, but our group never floated past. We did talk to a large group of ladies who were part of a wedding party.

From there we made our way downriver to the Fulton Branch Float Camp. From the picnic area, there is a commanding view of the river. We spent a very peaceful hour relaxing on the bluff overlooking the river. During that time only one group paddled past us. It wasn’t our group, but we talked to them as they made their way past us. From Fulton Branch, we traveled over several miles of Forest Service roads to the River Bluff Float Camp. The secluded area has a great view of the river. We were all alone while we were there. The beautiful day and the peaceful surroundings helped melt the stress away. As I took in the gorgeous views, I realized that all was well with my soul. We were never able to find our group, but we had a wonderful day anyway.

On the drive back home, I thought about the stress that I had been under for the past few months. But after spending a lovely sunny afternoon in the beauty that is the Ouachita National Forest, I realized that peace, like a river, had attended my way. This year has been a tough one for my family and me, but even though sorrows like sea billows roll, God wants me to be able to say, “it is well with my soul.” 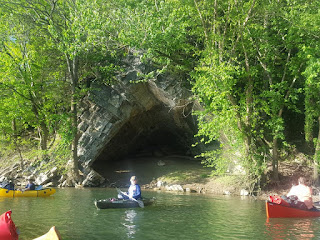 Gentle Reader, I want to be able to say with the Apostle Paul; “I have learned to be content and self-sufficient through Christ, satisfied to the point where I am not disturbed or uneasy regardless of my circumstances. I know how to get along and live humbly in difficult times, and I also know how to enjoy abundance and live in prosperity. In any and every circumstance I have learned the secret of facing life, whether well-fed or going hungry, whether having an abundance or being in need.” Philippians 4:11,12 (AMP) With God in my life, no matter what happens to me, I can truly say “it is well with my soul.”