Recently my parents went on the Hemmings Cruise 2010. They had a wonderful time and visited with many wonderful people. Whenever old car people get together one of the topics of conversation is always the cars they used to own.

One of my Daddy's favorite car stories is the story of his honeymoon car. It was in 1954 that he spotted a 1949 Frazer Manhattan behind a gas station in Nashville, Tennessee while he was going to college in nearby Madison, Tennessee. The Frazer had been sideswiped and the front bumper bent, but it was only five years old, it was very nice, and it was only 100 dollars.

After buying the car he found out that it had belonged to Rod Brasfield, a comedian on the Grand Ole Opry. That made it a celebrity car. Unfortunately he also found out that number 5 rod was knocking.

With the help of his friend Louie he dropped the pan, pulled the crankshaft, had the number 5 throw ground to .060, installed a new bearing and put it back together. With a little body work and some Bondo, which was a fairly new product at the time, along with a gallon of blue paint it looked good and he was proud of it.

The 49 Frazer was the first car that Daddy ever put five dollars worth of gas in at one time. It had a tank that held over 20 gallons and gas was 24.9 cents a gallon. Soon after the Frazer was repaired and repainted it was December 1954 - time for my parents wedding. They headed from Tennessee to cold and snowy Michigan where they were to be married. By the time they got there there was a tic tic tic in the engine. Daddy thought it was a loose tappet, so he adjusted the valves out in the snow. 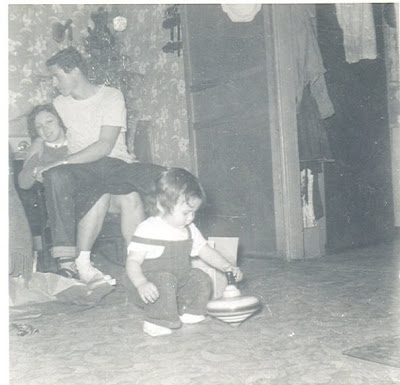 
After the wedding they headed for Kansas. As they drove along the "tappet noise" got louder. They only had 35 dollars between them as the traveled, and they spent 5 dollars on a motel the first night. The knocking was getting louder. Daddy pulled off the number 5 plug wire and kept going. At 75 miles per hour in overdrive, you could barely hear the noise. They made it back to school safe and sound and a month later scraped $6.75 together for a new bearing insert and after it was installed the Frazer was running good again.

After awhile they sold the Frazer and bought a 1949 Chevy convertible but that is another story for another time. I hope the Rod Brasfield/Honeymoon Frazer is still alive somewhere. Daddy did find a 1949 Frazer Manhattan for sale at Country Classic Cars in Staunton, Illinois, and just had to once again own a car like his honeymoon Frazer. 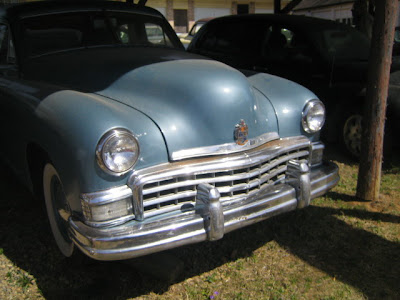 Posted by Richard Lawry at 8:44 PM