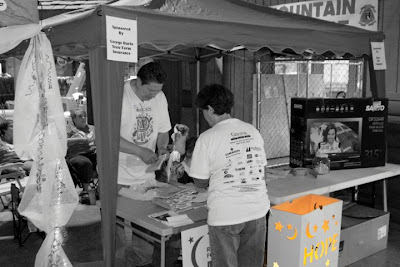 Last week was extremely hectic. The Relay For Life was scheduled for Friday evening. Gina and I spent the week getting things ready for the big event. All week we kept a wary eye on the weather forecast. We decided that we would have to make a decision on what to do by Thursday. Thursday morning the forecast was for rain Friday and Saturday with the possibility of severe weather Friday evening. We knew that there would be no outside in the park event this weekend. The Christian Motorcycle Association allowed us to rent their large multipurpose building at their Iron Mountain Campground a few miles south of Mena. Because we had to change venues at the last minute we worried that the Relay might not be well attended, but our community made us proud. Attendance was excellent. 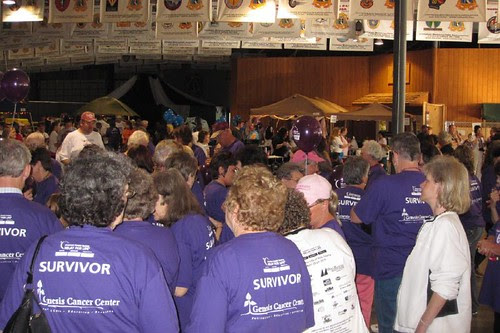 Friday morning I was awake early trying to figure out the logistics of moving the Relay. We started setting things up at about 10:00 A.M. Gina and Lisa figured out a way to outline a small track in the building to be used for the Relay laps. All of the teams had to set up around the track. It was very crowded and some of the teams were two deep around the track but we managed to get everyone in. 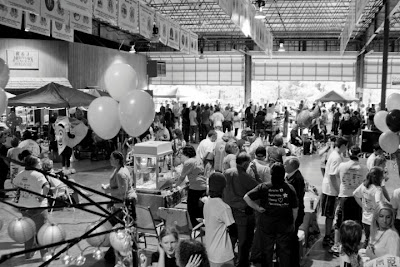 The Relay started at 6:00 P.M. with the boy scouts posting the flag as Susan Brewer sang the national anthem. 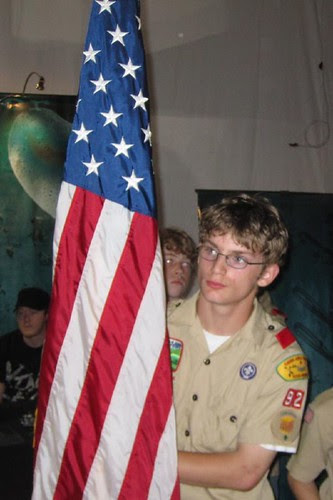 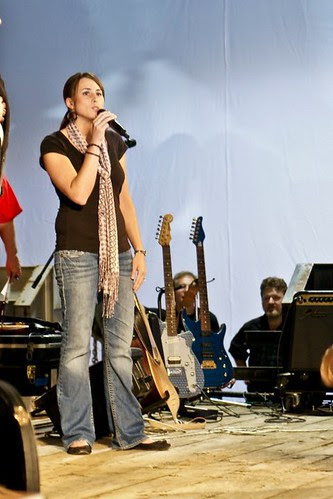 After short talks by Gina and Mayor McKee, the Survivors kicked of the Relay by walking the Survivor Lap. 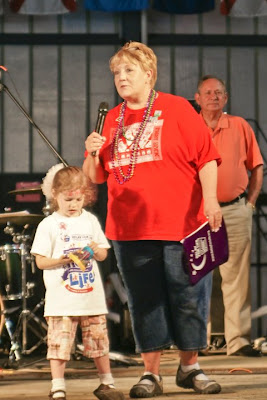 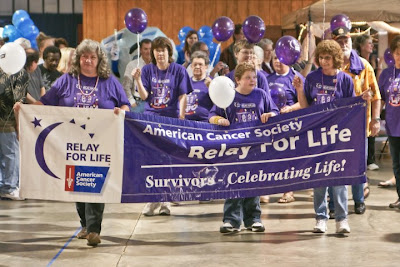 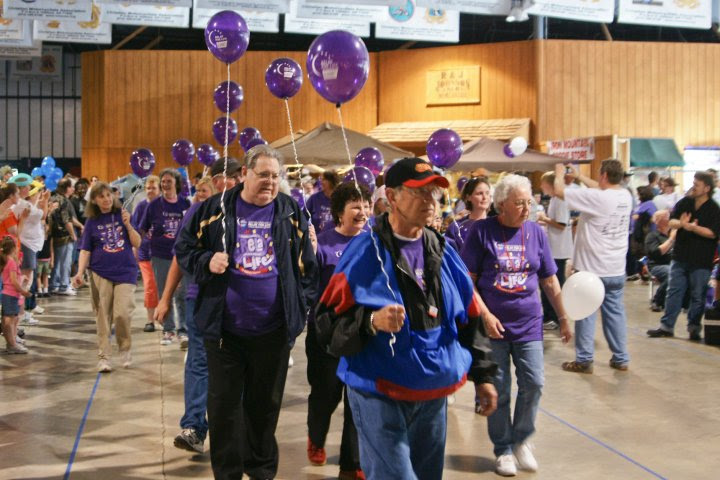 The next group to be honored was our Caregivers. They play such an important role in the battle against Cancer. My wife, daughter and granddaughters walked in this lap. After the Caregivers have made their laps, the teams each took a lap around the track. We had 21 teams present representing 382 people who had signed up for Relay to help in the fight against cancer. 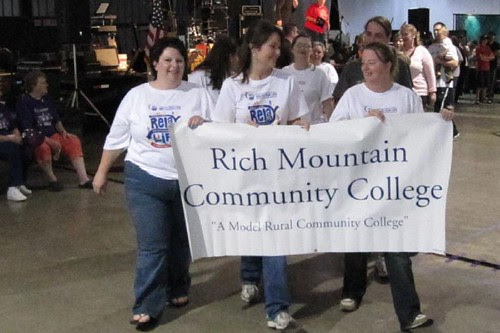 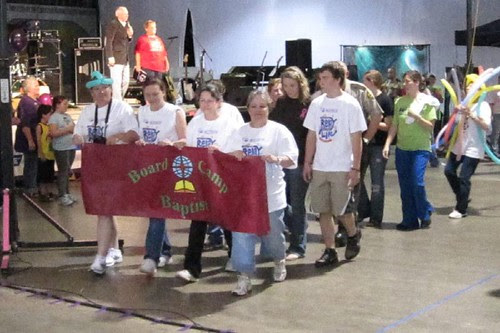 When the team laps were completed, anyone who wanted could walk the track. Each team is supposed to have a team member on the track. While everyone was walking we were listening to top notch entertainment from local bands Muzzleloader, Lana Gail McDonald & StormRider, Weird Harold & the RubberBand, HindSight, Katie Beth Head, and Richie Owens & Six Mile Creek. The musicians were great and really got into the spirit of Relay. Here is a video of a lap around the track while Jerod, the lead singer of Muzzeloader came down off the stage and sang while walking with the Relayers.

Here in this video Vinnie Lee, guitarist for Weird Harold & The RubberBand, takes a lap with the Relayers while playing lead guitar.

The youngest entertainer of the evening was my granddaughter Autumn. She came all the way from Baton Rouge, Louisiana with her Mommy and her sister to attend Relay For Life. She wanted to sing, and when you are in charge of an event one of the perks is allowing your granddaughter to sing. She sang Jesus Loves Me.

All of the teams had food and activities throughout the evening. Our team had a jail set up where you could have a Sheriff Deputiy arrest and handcuff someone if you paid a dollar. It cost five dollars to get out of jail, or you had to stay in jail for ten minutes. 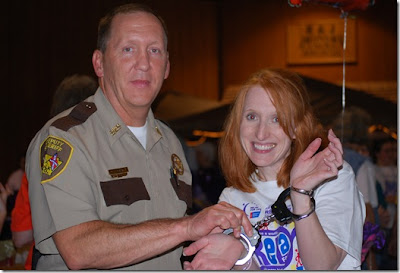 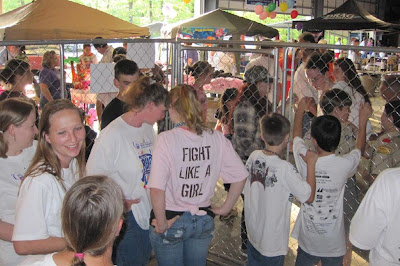 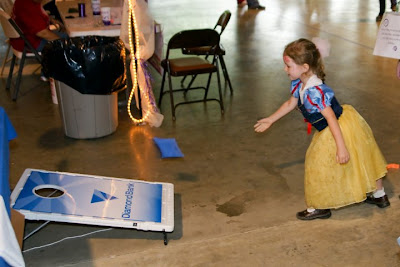 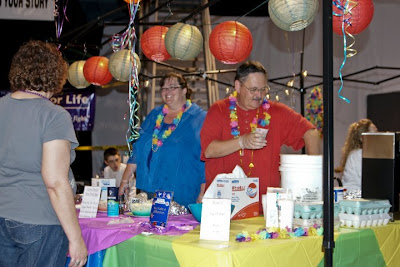 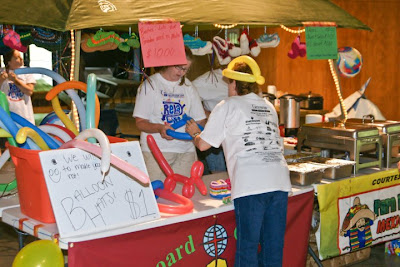 At 9:00 P.M. the celebration of the last three hours quieted down and the Luminaria Ceremony began. The Luminaria Ceremony is the opportunity for people to come together to remember loved ones lost to cancer and honor those who have won their battle. This is one of the most moving parts of Relay For Life. The Luminaria line the track, and the name of each person represented there is respectfully read from the stage. Jim Huff read the names while Richie Owens and Bear Barton played softly in the background as people looked for that special Luminary that honored their loved one. 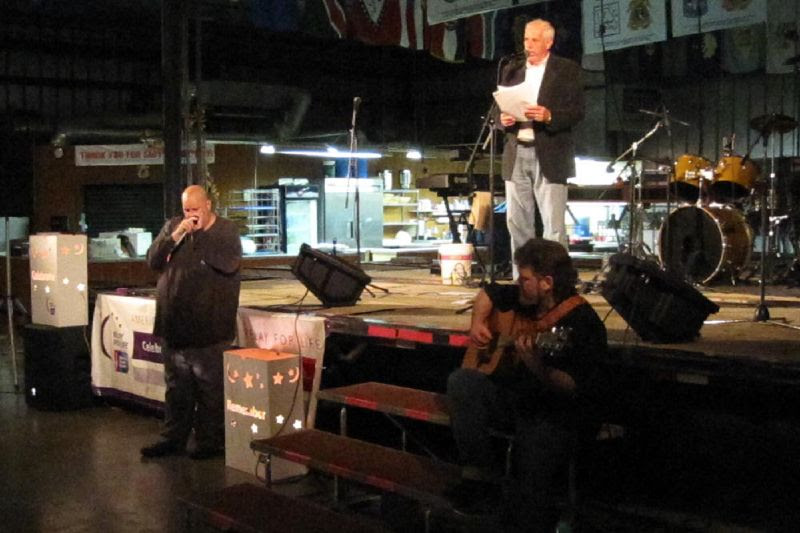 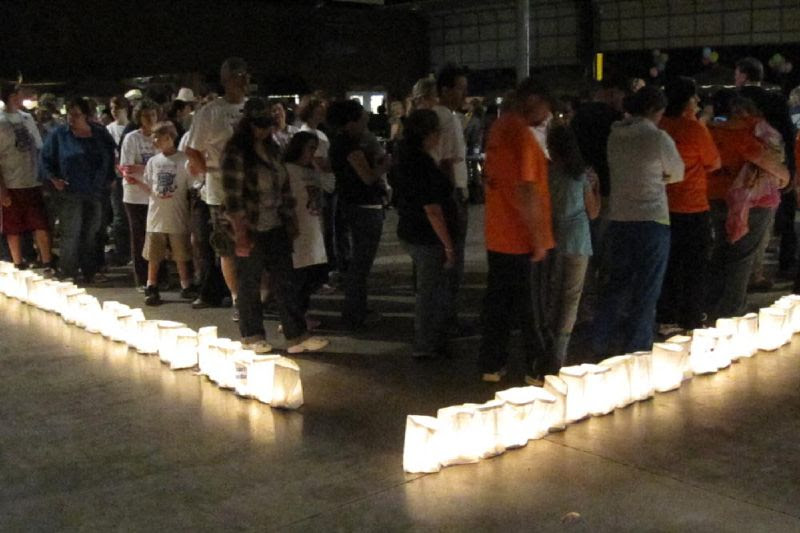 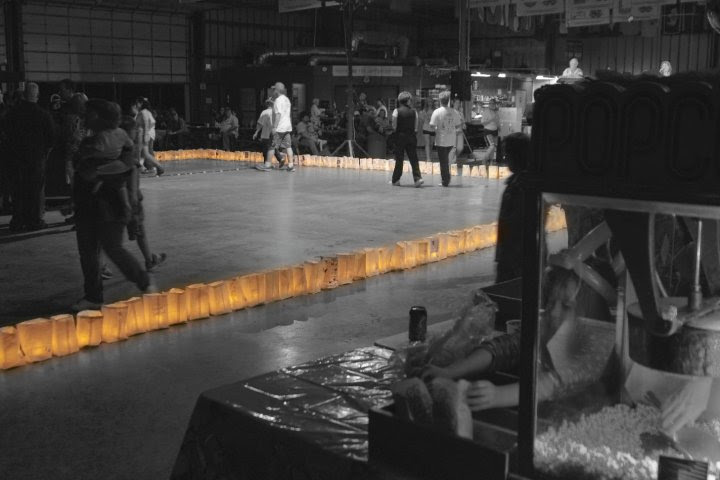 After the Luminaria Ceremony the party that is Relay For Life starts once again and continues on through the night. At this time most of the people from the community who have come to enjoy the evening have left for their homes and just those who are on a Relay team are left. As it gets later we lose some participants, but at 6:00 A.M. Saturday morning we still had 14 teams circling our track. That is a record for the most teams to spend the night at a Polk County Relay For Life. At the 2007 Relay, the first one held in Polk County, there were only two teams left when morning came. To help keep ourselves awake and entertained during the night we had special theme laps such as Pajama Lap, Bell Lap, Stuffed Animal Lap, Cowboy Lap, Blanket Lap, Crazy Hat Lap, Wheels Lap and many more. Everyone seemed to enjoy the theme laps and some of the teams got very creative. 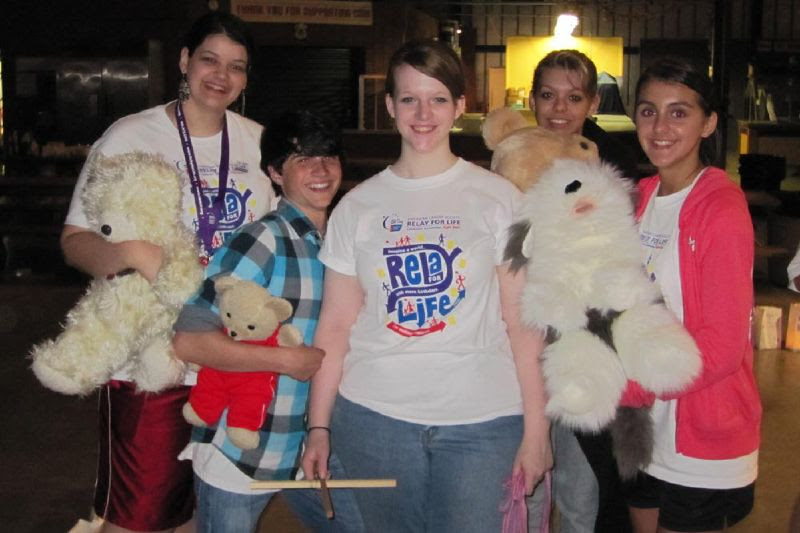 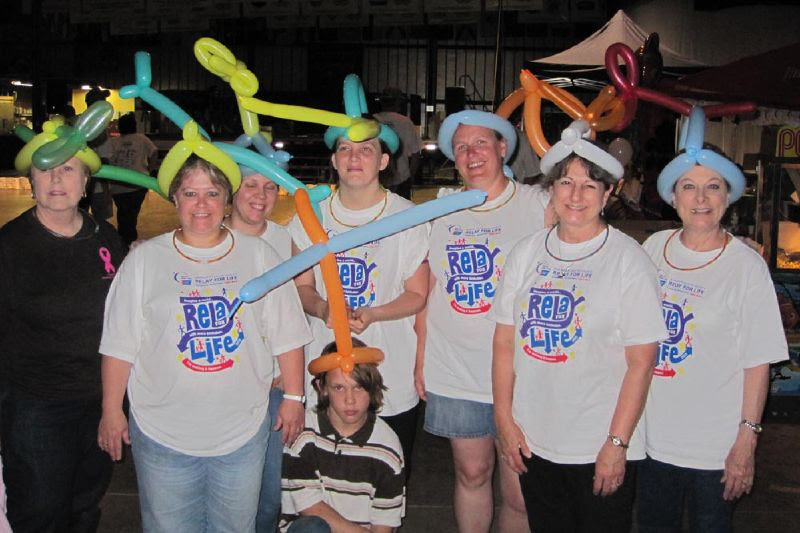 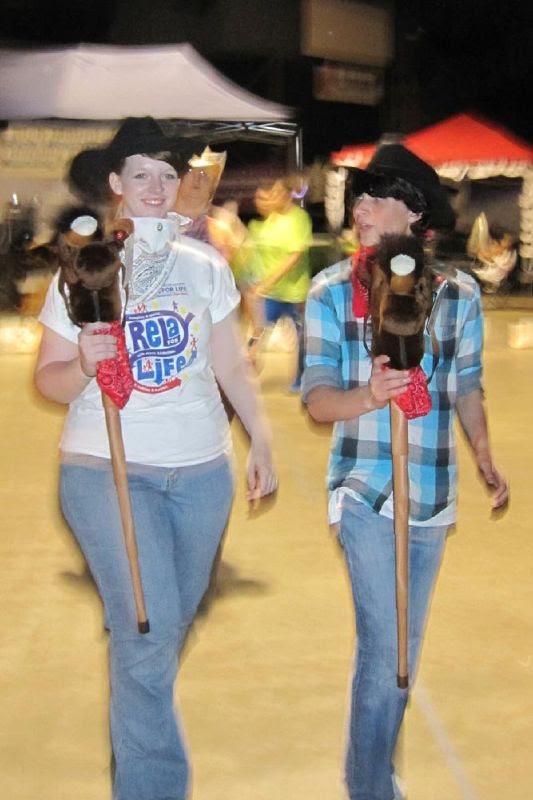 There were people circling the track all night long, but not everyone was able to stay awake. Even Gina took the time to take twenty winks on her cot that her sister Lenora bought for her to take to Relay. Because I had to keep the theme laps going I wasn't able to get a nap in. Some slept on the hard cement floor. 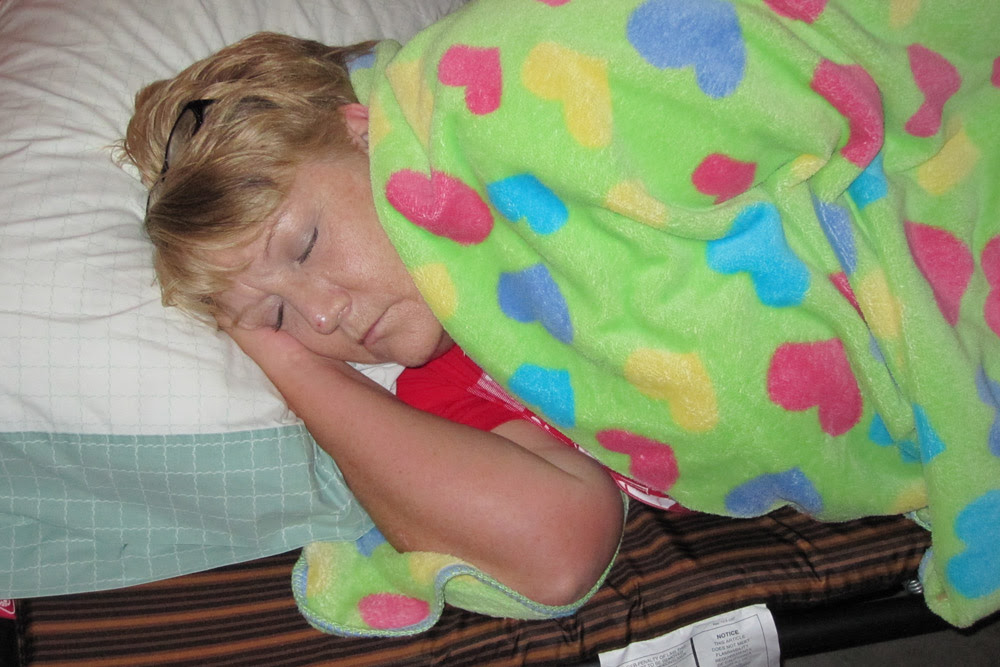 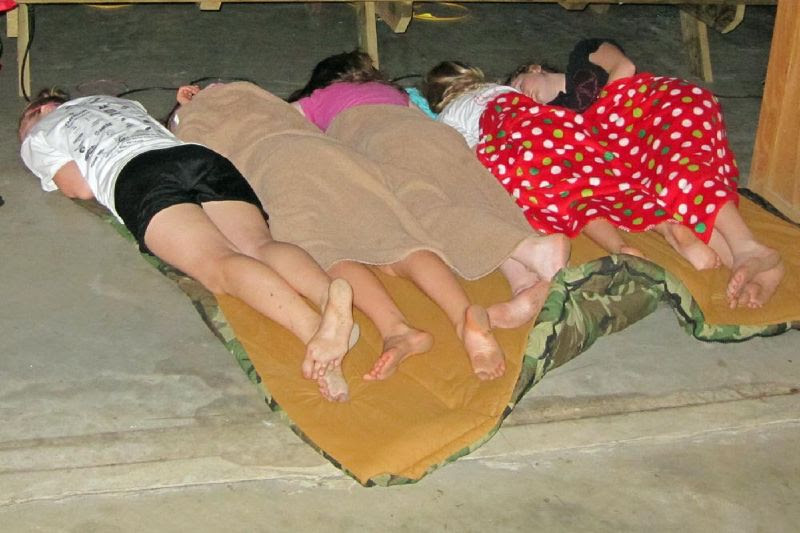 When morning came it was time for everyone to take down their booths and clean their area. By 9:30 the building was once again empty and there were no signs of the crowds that had been there for the evening or the die hard team members that had spent the night. Relay For Life was over for another year. Even with the weather and a change of venue it was very successful. Polk County has raised over 50,000 dollars for the fight against cancer. It had been a Hard Days Night, but I find that working for such a worthy cause and knowing that is it important to so many people makes me feel alright. 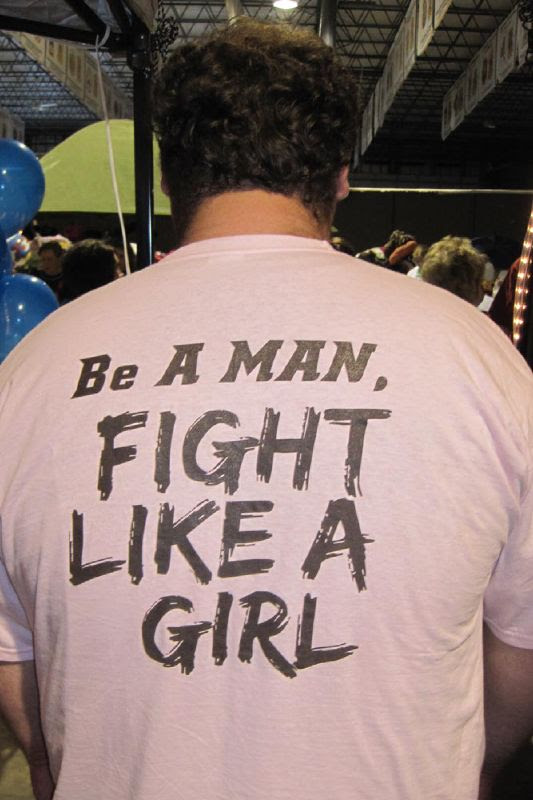 Posted by Richard Lawry at 6:37 PM